Having gained control of Sakura's body, Ino tries to make Sakura forfeit the match. Naruto yells to Sakura not to give up, prompting Inner Sakura to appear and force Ino out of Sakura's mind. Although confused by what had happened, Ino lacks the energy to try again. Kakashi presumes that Ino's lack of chakra was a factor in Sakura's liberation, but also takes note of Sakura's strong will to not lose. Ino and an equally exhausted Sakura charge at each other to exchange final blows, resulting in a double knock out. Hayate decides that neither of them will pass to the next round. They are taken aside to recover while the fifth match between Temari and Tenten commences. When they wake up, they decide to resume their friendship but will continue to compete for Sasuke's affection. Meanwhile, Temari defeats Tenten easily and swiftly, with all of Tenten's projectile weapons being rendered useless against her wind techniques. 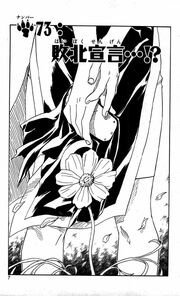