A Suspension Bridge to Peace (平和への架け橋, Heiwa e no Kakehashi) is volume 54 of the Naruto manga.

Naruto Uzumaki completes his training of gaining the Nine-Tails' chakra inside of him. Before Yamato, Naruto, and Killer B leave, Naruto senses Kisame Hoshigaki inside Samehada. Samehada springs into action but Naruto used his right hand to smash Kisame. Meanwhile, Might Guy arrives to the Falls of Truth. He starts to go into the Falls to confront his true self. His true self starts to appear behind the waterfall and ask Guy why he keeps on talking about the power of youth. Guy is furious and demands that his true self confront him. The true self is about to appear when Kisame bursts through the waterfall. In thinking that the "bizarre bug" who is Kisame is his true self, Guy proceeds to fight him.

After learning that "the creature" is not Might Guy's inner self and is an Akatsuki spy, Guy and Aoba Yamashiro begin to battle Kisame, but he continues to flee. Guy uses the Eight Gates, opening the Sixth Gate and pursues Kisame with Killer B's help. Kisame summons a shark and hides a scroll in its mouth, containing his gathered information. Guy goes after the shark but Kisame hides it in a wave of a thousand sharks. Guy opens the Seventh Gate and performs his rarely seen one-hit kill move, Daytime Tiger against Kisame's Water Release: Great Shark Bullet Technique.

Guy defeats Kisame, who, while unconscious, is restrained by Yamato's Wood Release, so Aoba can gather information from Kisame's past. In the past, when still a shinobi of Kirigakure Kisame was a bodyguard for Cypher Division, but he killed his comrades when danger of secret codes' leak appeard. Later, he killed his superior, who betrayed the village, and took his sword. Then, the Fourth Mizukage approached. Speaking with him, Kisame described his life as one big lie. He then spotted a person controlling the Mizukage. The person promised to release him from lies and introduced himself as Madara Uchiha. Back in present times Kisame bites his tongue and releases himself from stocks.

Kisame bites his own tongue in order to force himself back to consciousness and prevent Aoba Yamashiro from obtaining any information about the Akatsuki from him. He then creates a dome of water around himself preventing Guy from attacking him and summons three sharks within it. He then remembers his first meeting with Itachi and considering Itachi's words, makes his own sharks consume him before Yamato has a chance to stop him. Watching Kisame sacrifice his life, Naruto comments that there are those within the Akatsuki who act to protect their friends. Then Guy says that Kisame lived and died as a true shinobi should and that he will always remember him. Guy then retrieves a scroll filled with information that Kisame had collected and Motoi suggests they take a look at it but when they open the scroll, it turns out to be booby trapped and a dome of water surrounds them while a shark takes the scroll and runs away with it. Meanwhile, Tobi and Konan are shown confronting each other in Amegakure where Tobi asks Konan where she's hidden Nagato and the Rinnegan to which she replies that she knew he would come and that she's been waiting to finish him off. Tobi replies by saying that he will not go easy on her just because she was a former Akatsuki member.

"A Suspension Bridge to Peace" (平和への架け橋, Heiwa e no Kakehashi)

Konan and Tobi face off in Amegakure standing on a lake. Tobi asks what it is about Naruto that made Konan and Nagato quit Akatsuki, and Konan replies that he is light personified and carries a flower called 'hope'. Tobi tells Konan that he was the one who got Yahiko to found Akatsuki, and the one who gave Nagato the Rinnegan. Konan attacks Tobi in an attempt to kill them both. Konan recalls Yahiko, and Nagato calling each other the bridge to peace, and states that she will be the support to both their bridges. Konan then asks if Tobi understands why she betrayed him. He replies no, and she says it's because he's darkness, and a flower will wilt in darkness. She reveals her ultimate technique and splits the lake beneath them in two.

Tobi falls into the chasm, and Konan continuously detonates exploding tags for ten minutes. Tobi survives, and states that he used Izanagi to escape from her attack. After Tobi explains how Izanagi works, Konan tries to kill him. Her attack is interrupted by Tobi, and he uses a genjutsu to force her to reveal the location of Nagato's corpse. Tobi then arrives at the shrine where Nagato is buried, and states that Nagato is the "third of the six paths" and a member of the Uzumaki clan.

Tobi warps Nagato's body away, and leaves. After this time goes back when Jiraiya was training the Ame Orphans. He implements a secret method of communication using "Hop-In" cards and explains their use and importance to them. Meanwhile, as Konan's body lays floating in the water a bloodied piece of paper is blown off of Konan's body by the wind. The red paper lands in front of a plank inside the old hideout of the Ame Orphans. The four planks with red paper in front of them symbolise that Jiraiya, and the orphans have all returned home. At the Akatsuki hideout, Tobi with a new outfit declares it's time to capture the Nine-Tailed Demon Fox.

Motoi sends a message to the Kage about the information leak. Naruto and B are to remain on the island as it is a moving fortress, and can't be tracked easily. Kabuto volunteers to capture the Eight-Tails and Nine-Tails in Tobi's place. Tobi reveals his army of one hundred thousand white Zetsu.

Ōnoki along with Kurotsuchi and Akatsuchi fly to the island. Naruto and the others hide the islands animals inside the turtle's shell. Kabuto and Deidara locate the island, but are confronted by Ōnoki.

Kabuto along with Deidara battle against the Third Tsuchikage Ōnoki, and his aides. Meanwhile, Yamato convinces Naruto to stay inside the giant turtle and complete his mission. After coming to see the battle outside, Yamato is eventually captured by Kabuto, who retreats back to the Akatsuki hideout. Kabuto explains that he will be able to produce even more Zetsu with Yamato. Tobi tells Kabuto to get to work, as his new left eye hungers for battle. 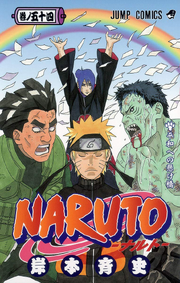