Code wonders why Boro didn't dispose of Ada, and explains to Bug why he didn't report Boro to Jigen. Bug asks Code if he knows about her abilities, believing whatever plan he has to be naïve. Code only knows Ada's supposed to know everything in the world. Bug explains he can't force Ada to obey him with brute force. Code forcefully opens Ada's unit with his transformed arm, confident he can just kill her if she defies him. Naruto and Shikamaru conference with the other Kage, telling them about Code, and their recent attempts to reach their base through the portals Amado told them about. Because they won't activate or are damaged, they're to assume Code is aware of Amado's betrayal. Shikamaru explains Code's goal of avenging Isshiki and cultivating a God Tree from a Ten-Tails. Darui trusts Konoha, but expresses concerns with trusting Amado. Naruto confesses not fully trusting him, but enough based on what he has offered so far.

Gaara asks about the possibility of Boruto or Momoshiki becoming a threat like Isshiki. Naruto claims to be ready to do what he needs as Hokage. He talks to Amado about Boruto's situation, wishing to keep the worst case scenario out of mind until it happens. Amado understands Naruto, revealing he used to have a daughter, though she's been dead for 12 years. Amado offers Naruto a drug he developed to weaken the Byakugan, a byproduct of his efforts to take Jigen down. He believes that since the Byakugan's origins lie with the Ōtsutsuki, weakening the Byakugan might halt Boruto's transformation into one. Amado stresses the potential dangers of using it, though the decision to use it ultimately belongs to Boruto, and warns him not to let his wife and daughter take it. Naruto thanks him. Ada wakes up and ignores Code when he greets her. He threatens to cut her throat, but she remains unconcerned and tells him to try. He's incapable of doing it, and she explains that because she's been asleep for so long, she's worried about bad breath. She asks for them to wait for her at the bar. While she brushes her teeth, Bug explains to Code that she has stolen his heart, that being another of her abilities. Code is impressed, but Ada says it's overblown. She explains that being able to see everything everywhere is boring, even if there's something occasionally interesting, like Isshiki dying. Code asks how her clairvoyance works. She explains her consciousness jumps places, and the limits of it. Ada can see into the past only up to the moment of her birth, and she's not precognitive, so she can't see the future. She did infer he would come to her to learn how to release the limiters on his body. She reveals he needs an iris scan and a voice-print command from Amado, though she doesn't know what the command word is. Code wants to have someone use the Transformation Technique to go around the biometric authentication, but Ada reminds him that Amado has remodelled his eyes with scientific ninja tools, which the Transformation Technique can't replicate. She surmises that's why he went to a shinobi village, but she intends to kill him just the same. Code assumes she hates him because he remodelled her body, but that's only half the reason. She asks Code if he likes her, and he confesses he does, and asks if the authentic-felling emotions he has are a result of her ability. She reveals everyone becomes captivated by her through her ability, even those who could come to like her naturally. She hates Amado because he has robbed her of ordinary love. Code realises that Boro didn't dispose of her because he was captivated by her, and asks how Jigen was able to order her disposal. Ada explains there are two types of hearts she can't steal: blood relatives, and Ōtsutsuki. She asks about Kawaki, and Code explains he's incomplete. Ada explains Isshiki died because of Kawaki's ploy. Code realises Kawaki would be able to have a normal romance with Ada, who would be unaffected by her ability, as would Boruto. She asks about his plan to cultivate a God Tree, and one of them would be enough for her. Bug thinks to himself they're both crazy. Ada tells Code that Kage are conferencing about him. Code and Ada toast to each other's goals. 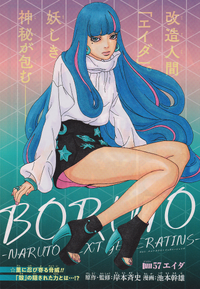