"The Key to the Future"

Naruto looks at Jiraiya's coded message, that appears to be a string of numbers. He informs Shikamaru that the first character is not a number, but katakana for "ta", a writing quirk of Jiraiya only Naruto would know. Kakashi suggests that that is meant to indicate Icha Icha Tactics is the key for the other, actual numbers. Taking the first word on each page of the book, they form the message of "the real one is not among them". They have no idea what this means, so ask someone who would. In Amegakure, the Six Paths of Pain sets out for Konoha, the one Jiraiya captured having been replaced. 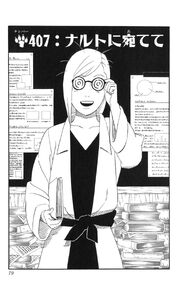