View source
watch 01:32
She-Hulk Trailer Dropped - The Loop
Do you like this video?
Play Sound

Amegakure (雨隠れの里, Amegakure no Sato, literally meaning: Village Hidden by Rain) is a small but highly industrialised hidden village located in an unnamed country. As its name suggests, it rains almost constantly in Amegakure and the surrounding area. All the water seemingly ends in a large lake that surrounds the village.

Ame ninja are said to be notoriously short tempered,[1] while their village trains them to their fullest potential, resulting in the creation of many original techniques.[2] Ame is frequently hired for assassination missions, an area of expertise prized by many countries.[3] A common trait of shinobi from this village is wearing rebreathers. Its shinobi also have a propensity for genjutsu.[4]

Because of Amegakure's location between three of the Five Great Shinobi Countries, it has frequently served as a battleground during the various ninja wars, making most of its population war refugees. Amegakure has adopted a heavy isolationist policy because of this, leading to the village's defences being abnormally impenetrable. To be admitted to the village, visitors, even those coming for Chūnin Exams held in Amegakure, must go through a number of security checks and are under constant surveillance during their stay.

Amegakure was led for many years by Hanzō, a notoriously powerful shinobi; during the Second Shinobi World War he slaughtered an entire Konoha platoon, sparing only the young Sannin. Despite his power, Hanzō was deeply paranoid and would rarely appear in public for fear of being assassinated. When, during the Third Shinobi World War, a group called Akatsuki began advocating for peace between the warring Konoha, Iwa, and Suna, Hanzō interpreted this as a threat to his rule. In the anime, this fear was exacerbated by Konoha's Danzō Shimura. Claiming to be interested in cooperating with Akatsuki, Hanzō, with support from Danzō, ambushed Akatsuki's three primary members and attempted to kill them all. After Akatsuki's leader, Yahiko, died, Nagato retaliated and slaughtered all of Hanzō's men, though Hanzō himself escaped.

At some point after the end of the war, a civil war broke out in the village to remove Hanzō from power. Led by an individual known only as "Pain", the rebel faction symbolised their rejection of Hanzō by placing a horizontal slash across their forehead protector. With Pain's near-godly power and rumours that he was multiple people, Hanzō and his forces were overthrown, with Pain being the one to personally kill Hanzō. Pain then went on to kill anyone even remotely connected to Hanzō, from close family to distant acquaintances, so that none would ever emerge to take revenge. Despite this, loyalists to Hanzō still emerged from time to time, though all were crushed by Pain.

Pain became Ame's new leader, revered as a god by the populace because of his contributions during the civil war. None ever saw Pain directly, his decrees instead communicated to Ame's citizens by his "angel", Konan, who came to be revered almost as highly as Pain himself. The only thing that Ame's citizens could conclusively say about Pain was that it only rained on Sundays or when he had to be away from the village.[5] Knowledge of Amegakure's civil war was not common throughout the ninja world, and news of Pain's victory was completely unknown to the point that other villages believed Hanzō to still be in charge. In the anime, Ame ninja travelling abroad are instructed to perpetuate this belief.

Pain uses Amegakure as his base of operations for his work with Akatsuki. Jiraiya, in the course of his investigation into Akatsuki, infiltrates the village and, upon being discovered, is killed by Pain. Despite this, he is able to get word of recent events in Ame back to Konoha, which Pain tries to prevent from spreading further, among other reasons, by destroying Konoha. Pain ultimately dies in Konoha, giving his life to aid Naruto Uzumaki's aspirations for peace. Konan becomes the new leader of Amegakure after Pain's death and swears Ame's support to Naruto's cause. She is shortly afterward killed in Ame by Tobi.

In Shikamaru Hiden, set several years after the Fourth Shinobi World War, Ame is invited to join the Shinobi Union. Despite this, the village was slow to rebuild following the defeat of Akatsuki in the War as well as the deaths of Konan and Nagato. Even the damage from Jiraiya's battle with the Six Paths of Pain hadn't been repaired in the decades following the War, and the cityscape was mostly abandoned by the time of Naruto's reign as Hokage. As such, it was used by Kara, which maintained a secret research facility in it for a while before abandoning it. When Sasuke and Sai investigated the village, looking for information about Kara, they triggered a trap left behind which destroyed the facility. After the Seventh Hokage learned of the village's terrible state, he decided to begin efforts for restoring the village.[6] 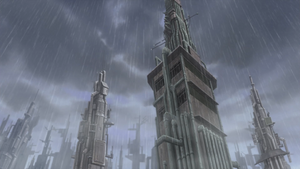