Ameyuri Ringo (林檎雨由利, Ringo Ameyuri) was a kunoichi from Kirigakure and one of the members of the previous generation of the Seven Ninja Swordsmen of the Mist.

In the anime, Ameyuri was stated to have died of an incurable disease at a young age.[2]

In the anime, Ameyuri has shown a playful attitude, toying with her opponents and showing joy in it like her swordsmen teammates. She is stated to never miss her prey. She will exterminate all of her opponents and will pursue any who has survived. She seems to develop a liking for those that can stand their ground against her and prove a challenge, which she refers to as meals. Despite her vicious nature in battle, she would show respect towards those whose fighting skills and courage meet her liking. Ameyuri took a particular liking to Omoi, who chose to fight against her while his comrades decided to flee and proved to almost match her in battle which she stated was her type of person. After their battle, Ameyuri gifted Omoi her swords and hoped for him to meet her again in the afterlife.[2]

Ameyuri was relatively short in comparison with the other members of the Seven Ninja Swordsmen of the Mist. She had long, red hair,[3] black eyes, and together with a Kiri forehead protector, she also wore a simple cloth around her head, distinctively tied at both sides so as the ends of the material protrude upwards, while the remainder of hair is allowed to flow downwards. She wore a loose, pin-striped long-sleeved shirt with a dark obi around the waist, black pants which got much looser near the ends, resembling hakama, and striped leg-warmers. Like all the other members of her generation of swordsmen, she wore bandages loosely tied around the neck and had jagged teeth.

As one of the Seven Ninja Swordsmen of the Mist, and likewise its strongest generation in history, Ameyuri was one of the most powerful shinobi produced within Kirigakure. She was also capable of using Silent Killing, as seen when fighting the Third Division of the Allied Shinobi Forces while under the effect of Zabuza Momochi's Hiding in Mist Technique. She is very well-versed in the use of Lightning Release techniques, and was apparently a skilled tracker, as Kayui stated "she never lost her prey". According to Might Guy, she was so strong that not even one hundred chūnin could beat her.[2]

Ameyuri was a very powerful swordswoman, able to fend off and gradually overwhelm another skilled swordsman, Omoi, with her own might. During her time as one of the Seven Mist Swordsman, she wielded the Kiba, twin swords imbued with lightning, proving herself ambidextrous. With these blades claimed to be the sharpest swords ever made, having the ability to cut through anything, and functioning in a similar manner to Lightning Release-based chakra flow, Ameyuri was very dangerous in battle. In the anime, it was shown that Ameyuri uses the Kiba in combination with agile spinning movements, sweeping through her targets while rotating around herself, hitting all enemies around her.[4] She could use many techniques using the swords, such as a technique that surrounds her enemies with lightning and also herself in order to perform a close range attack. She could shoot individual lightning bolts with great precision and could also use a technique that can devastate a whole landscape.[2]

Amidst the battle with the Third Division the reincarnated previous generation of the Seven Ninja Swordsmen of the Mist are summoned by Pakura and Gari, under Kabuto Yakushi's instruction, with the intention of overwhelming the opposition. Amongst their number was Ameyuri, who after being futilely bombarded by various techniques and weapons, retrieved Kiba from within a scroll in Mangetsu Hōzuki's possession. Entering the fray whilst concealed by a thick mist, Ameyuri began a silent massacre, masterfully dispatching several shinobi as electricity crackled around the blades. With Zabuza Momochi's defeat, the mist cleared exposing Ameyuri to the enemy. By the time Kakashi Hatake and Might Guy departed for Naruto Uzumaki's location the following day, she had been sealed by the Third Division.[5]

In the anime, at dawn of the war's second day, Ameyuri reappeared on the battlefield. Ameyuri slaughtered countless shinobi that had crossed her path and noticed that there were survivors who had escaped. Tired of fleeing and wanting to avenge Yurui's death, Omoi stays behind to fight the kunoichi. Impressed with Omoi's skills, Ameyuri spares him until she disposes of his comrades. After attacking Nurui and Kayui, Ameyuri pursues the persistent Omoi, who leads her into a bottomless marsh, trapping them both when the Kumo shinobi baits her in using her strongest technique. Kakashi and Might Guy came to back up Omoi and have Sai pull him out while Ameyuri sinks into the marsh. Before she sunk into the marsh completely, Omoi gives her one of his lollipops as a farewell gift, and in turn she gives him her swords in return, as a thank-you gift.[2]

Later, with the release of the Impure World Reincarnation technique, Ameyuri's soul was returned to the afterlife.

Ameyuri Ringo is a playable character in the following video games: 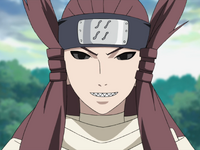