Ami (アミ, Ami) is a former academy student of Konohagakure.

She appeared during a flashback to Ino Yamanaka and Sakura Haruno's time in the Academy. During a kunoichi lesson she, Kasumi, and Fuki taunted Sakura about her forehead, prompting Ino to throw a flower (that she claimed was poisonous) into Ami's open mouth. Ami quickly ran away to tell their teacher, Suzume. In the anime, she was also seen in Naruto Uzumaki's flashback during shuriken training as one of Sasuke Uchiha's admirers.[2]

She seems to be very boastful and likes to bully Sakura due to her large forehead. In the anime, she appears to be a popular girl in a gang with a lot of arrogance, thinking she was better than both Sakura and Ino, and dependent on her friends. Because of that, her arrogance was brought out as she thought that her "gang-members" would protect her.

Ami has purple hair styled in an asymmetrical cut and brown eyes. She wore a striped blouse that was tied at her neck and waist over a dark blues dress that had a marking on the left sleeve but none on the right which she wore along with a pair of dark pants and sandals. 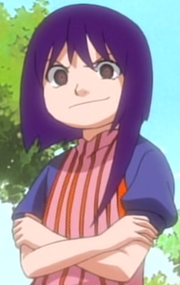