Antidotes (解毒薬, Gedokuyaku) are types of medicines that act as a cure for various poisons. They can be administered to an infected person through several mediums. Some poisons are complex, and therefore creating the antidote will require careful attention or else it could potentially kill the victim; Sasori noted that when making antidotes not even a hairline mistake could be made or else it wouldn't work. However, specially trained, genius medical-nin like Tsunade, Shizune or Sakura Haruno can actually analyse and decipher the many different elements used in complex poisons and easily create a cure. They are usually a bottled liquid but can be anything from a flower or powder.

There are different types of antidotes.

Certain characters have encountered poisons throughout their careers as ninja. During the Second Shinobi World War, Tsunade was able to produce antidotes to every one of Chiyo's poisons, much to the latter's resentment.[1] During the mission to rescue Gaara, Sakura demonstrated the skill to not only extract and analyse Sasori's poison swiftly, but also produce an antidote to counter it; Sasori was confident that the poison was so complex that no one within Sunagakure should be able to counter it, and Sakura's success at doing so surprised him.

Apart from using antidotes to poisons, a ninja can also work to build-up a tolerance to certain poisons by gradually exposing oneself to non-lethal amounts of those poisons. Orochimaru, in the effort to make Sasuke Uchiha into the perfect vessel for his Living Corpse Reincarnation technique, made it a point to make Sasuke immune to most poisons, such as the one that Shizune taught to Sakura in order to use on her kunai.[2] 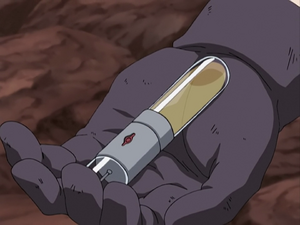