"The People Blocking the Way!!"

Akatsuki begins removing Shukaku from Gaara's body, a process that will take three days of intense concentration. Team 7 determines that Gaara has been taken to the Land of Rivers. Since Team Guy is closest to that location, Pakkun is sent to guide them. Zetsu sees Team Guy approaching and informs the rest of Akatsuki. Kisame, having a score to settle with Guy, volunteers to stop them. He attacks Team Guy, but is disappointed to find that Guy doesn't remember him. 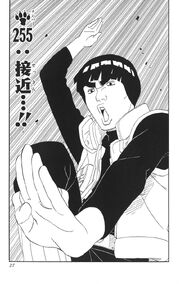