After the Fourth Shinobi World War ended, Ashimaru and Hidari lost their jobs, leading to them taking missions directly. Fifteen years later, the pair were hired by Iori, with the objective to retrieve the deed to the Green Banks bridge. Providing Iori with poison, he used it to kill the village head of Green Banks. For three months, the two assaulted the village in an attempt to force the new village head Kiri into handing over the deed.

He appeared to be a coldblooded individual with a strong, battle-crazed mentality, evident from having no qualms trying to kill a child or stabbing a man who hired him. He was also overly confident in his abilities, recklessly attacking with no concern for defending.

Ashimaru was a burly shinobi with a towering stature, easily being a head taller than Konohamaru Sarutobi. He had short dark spiked hair and no eyebrows. His forehead was dominated by a red triangle with a point ending between his eyes. Ashimaru's attire consisted of a black long shirt which included a halfmask that covers the lower part of his face. The shirt was held in place by a wide belt, leaving two lapels over blue pants. Ashimaru's arms were covered in bandages and he had two swords strapped to his back. His attire was finished off by normal shinobi sandals with some bandages around his right one.

While little had been shown of his overall skills, the fact that Ashimaru carried two swords implies that he was skilled in kenjutsu. He was shown to be very resilient, unfazed by the series of explosive tag blasts set off on him.

Ashimaru and Hidari's actions made Kiri request Konohagakure for help. Worrying about the danger one of the Five Great Shinobi Countries could cause, Hidari devised an alternate plan to kidnap Kiri and ransom her for the deed. Once their diversion let Iori capture Kiri, the two missing-nin betrayed and killed him. When facing the Team 7, Ashimaru went after the genin. While easily repelling Boruto Uzumaki and Mitsuki, Sarada Uchiha used the initial attack to analyse his moves. This let Sarada devise a team assault that let her defeat the larger foe with one powerful blow. 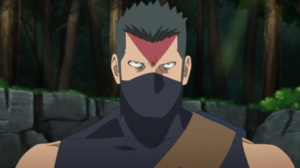