The Assimilate All Creation Technique enables the user to take on the properties of a nearby object, material, or substance, and any of its special characteristics.

Upon taking on the properties of the targeted object, the user himself becomes completely comprised of the material, while gaining any special characteristics and weaknesses attributed to it. They are also able to manipulate any substance similar to what was absorbed, allowing them to mould it into different forms to create various techniques of their own, while also allowing use of jutsu involved with said substance. Should the need arise, they are able to generate more of the emulated substance from their bodies.

Nagare, who once took on the properties of a rock, was able to create various imitations of other techniques, like Assimilation: Rock Blizzard and Assimilation: Sand Waterfall Funeral. He was also able to turn his skin to rock, either entirely or partly, and could even survive being blown to bits by simply assembling himself.

In the anime, during the Fourth Shinobi World War, the White Zetsu Army were seen using this ability as well; allowing them to take on the property of the red soil around them. This gave them poisonous qualities, that made them into even more formidable soldiers. However, they were also susceptible to adverse effects, gained by the soil's high conductibility to lightning-type attacks.[1] 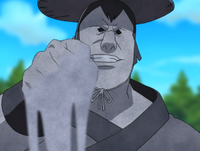