The Asura Path (修羅道, Shuradō) grants the user the ability to augment their own body to summon mechanised armour and various ballistic and mechanical weaponry.[2] During his lifetime, Nagato channelled the Asura Path through the body of a ninja puppeteer.

Through the Asura Path, the user is able to form up to four additional arms and two additional faces, as well as a folded, serrated blade-like sash around their waist. These additional appendages, as well as the user's body as a whole, are augmented with a variety of mechanical weaponry, which they can access at will. The user can fire their forearms as long-range projectiles or pull them off to reveal and fire a cluster of segmented missiles at targets. They are also able to protrude a set of flexible blades and drills or a series of mechanical tendrils from their arms, as well as quickly propel themselves forward by emitting a burst of chakra from holes in their feet. The user can also release a powerful chakra blast, which is capable of destroying numerous buildings at once, either by transforming one of their hands into a cannon or by opening the crown of their head.

The body through which Nagato channelled the Asura Path displayed enough raw physical power to rip Jiraiya's arm off and crush his throat with basic taijutsu, as well as to throw the Animal Path all the way into Konohagakure from the outskirts of the village. Additionally, the Asura Path was able to survive otherwise fatal damage due to its mechanised insides. All of these abilities befitted the "warring demon" name that the Asura Path held, whilst giving it a considerable degree of versatility. 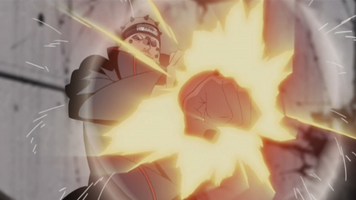 The detached hand being launched. 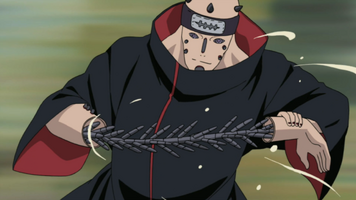 As displayed through Nagato's Path, not only was the arm detachable, but a cluster of segmented missiles produced from within it. 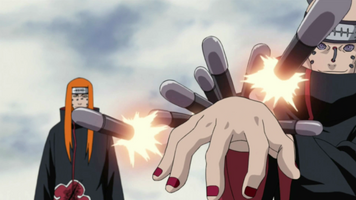 The arm itself could be used as a launching pad to launch the missiles. 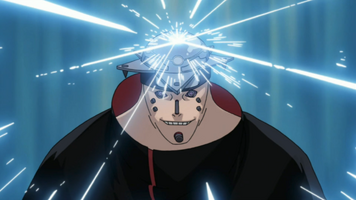 The Path's head opening up to reveal a cannon. 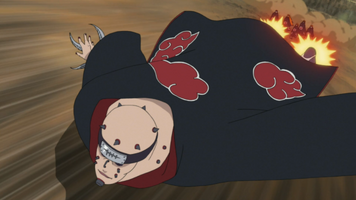 The Path being propelled with mechanisms from the feet. The right hand also shows additional weapons being produced. 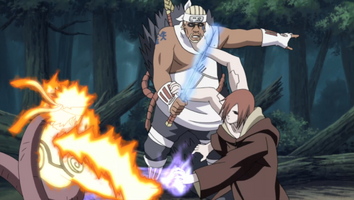 Additional arms being equipped in battle.

In Buddhism, the Asura realm is the plane of semi-divine warring demons which people are reincarnated in due to actions based on jealousy, struggle, combat or rationalisation in a previous life, and though powerful, live in constant violence and conflict to which there is no resolution nor peace. Following a common depiction of Asura, this ability allows the user to possess six arms and three faces, each of which display a different emotion. Like Deva, Asura are also a race of supernatural beings. They are also featured in Hinduism as divine beings, and are known to live a life pursuing power, while indulgent and representative of materialistic and carnal pleasures. Both depictions play in the abilities of the Asura Path.

It also draws inspiration from Hinduism, where Asuras in mythology purportedly had the ability (called Astra) to use magical equivalents to modern day biological missiles.