This man was a shinobi Jiraiya met during his journey to find his disciple.

In the anime, the Asura Path was shown to be a wandering puppeteer with insight to the world. His body was used by Nagato years later as the Asura Path.

The man was tall, bald with an unusual body shape, possessing a very thick neck, no ears and a large jaw. He also had part of his face obscured by a rice hat in the anime, possibly hiding a headband that had not been shown in the manga, as Jiraiya quickly discovered that he was a ninja. The Asura Path's unnamed puppet was made to look like a baby, and was capable of emitting infantile cries.

The Asura Path was the only body of the Six Paths of Pain to not have orange hair, simply because it had no hair at all. It had a vertical ring piercing on its nose, six spike studs all around its head, three studs on the top and bottom of each of its six arms, an enormous cylindrical stud on its chin, and two vertical studs on each of its upper cheeks. The body had three faces, each with a different expression, and two of which appeared from the sides of its head only when it removed its cloak in a fight: happy (its normal face), angry, and neutral. It also had a long, saw-like "tail" which stretched from his back over his head. As a mark of Nagato's control, the Rinnegan appeared in its eyes.

In the anime, when alive, he showed the ability to control a puppet with threads made out of chakra.

As part of the Six Paths of Pain, the Asura Path is used for a number of different purposes over the years: all six Paths are used to overthrow and kill Hanzō; when Jiraiya infiltrates Amegakure in order to find out more about Akatsuki, the Asura Path fights him and ultimately contributes to his death; in the anime, Asura Path assists in the capture of the Six-Tails; it participates during Pain's Assault, and like the other Paths it is defeated by Naruto Uzumaki.

Asura Path (character) is a playable character in the following video games: 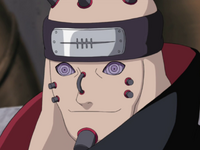 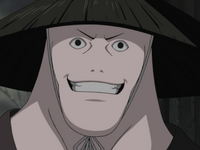