Baru Uchiha (うちはバル, Uchiha Baru) was a shinobi of the Uchiha clan.

Born to the Uchiha clan, Baru was of its few members who were able to awaken the Sharingan in his youth, as well as his own Mangekyō Sharingan.

During the continuous struggle between shinobi clans, Baru and his clansmen faced an opposing force who quickly wiped out Rai Uchiha's comrades with a trap. However, Rai nullified the outcome by sacrificing one of his eyes in order to use Izanagi. After the enemies were defeated, Baru challenged Rai for the leadership of their group and killed him using his own Izanagi. However, he was killed by his other clansmen when he was just celebrating his victory.

Baru was a young man with shoulder-length dark hair and eyes. He wore the standard attire of the Uchiha clan with its symbol emblazoned onto the back of the mantle. He also wore a diagonal harness across his right shoulder with a single pouch above the chest. Accompanying this was a sword mounted on his left hip by a white belt and two small equipment pouches on his back. He had a Mangekyō Sharingan, a black triangular shape.

Not much is known about Baru's abilities, except that he awakened the Sharingan and was able to use the Uchiha clan's Izanagi technique. He also had the Mangekyō Sharingan, which appeared as a simple triangle with curves next to each of the triangle's sides. He was at least skilled with kenjutsu considering he had a sword. 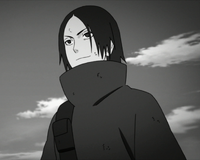