Both Isshiki and Sasuke are impressed by Naruto's chakra and wonder what it could be. Kurama explains the principles of this mode to Naruto, how it consumes their chakra to create a new type of energy. Kurama stresses the importance of avoiding unnecessary moves and even unnecessary thoughts to make Baryon Mode last longer. Isshiki attacks Naruto, who counters his moves and lands hits of his own with ease. Sasuke considers Naruto's performance to be above Isshiki's. Isshiki attempts to crush Naruto with his cubes, but Naruto tosses them at him. Sasuke grabs Boruto and takes him to a safer distance from the fight. Naruto and Isshiki exchange more blows, and Isshiki throws more shrunken rods at him. Naruto is able to grab them even before they regrow, impressing Sasuke, who struggled to track them even with the Sharingan. Isshiki is incredulous of how fast Naruto got so much stronger. At Konoha, Amado asks about Kawaki's prosthetic hand. Katasuke explains that it runs on Naruto's chakra, as it was originally made for him. Sumire asks if he's able to restore Kawaki hand, which Amado confirms is the first thing he intends to do after they don't have to hide from Isshiki. Through the prosthetic, Kawaki feels Naruto's chakra getting weaker. In the battlefield, Sasuke and Isshiki also notice it. Boruto passes out. Isshiki grasps the life-shortening nature of Naruto's power. Much to his surprise, Isshiki begins spitting up blood. Kurama explains to Naruto that the life-shortening effects of Baryon Mode are, in this case, an advantage to them, because they also apply to Isshiki when they come into contact.

Isshiki estimates that instead of 20 hours, he has less than 30 minutes left in his current vessel. Kurama makes it clear that their goal isn't winning, but getting in attacks so Isshiki runs out of time before they do. Naruto continues exchanging attacks with Isshiki. Sasuke notices Naruto's chakra continuing to get lower. Isshiki notices his lifespan getting smaller, and Naruto taunts him about it. Isshiki notices something that pleases him. Shikamaru asks Kawaki to explain himself, but when he tries to focus, a rift appears around him, taking him to the battlefield. Because Kawaki's prosthetic runs on Naruto's chakra, he was able to use that connection to find Kawaki and bring him there. Sasuke stresses about this turn of events, and Boruto opens his right eye. 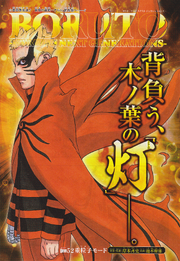