The Bashōsen (芭蕉扇, literally meaning: Banana Palm Fan) is a large fan that is able to generate all five of the basic elemental chakra natures. To do so, the user need only say a mental command, which produces substantial amounts of the desired element when the fan is waved. In the anime, the fan could also be used as a shield and was able to defend Kinkaku against Darui's Storm Release: Laser Circus.[1]

The Bashōsen is revered as one of the treasured tools of the Sage of Six Paths. All five of the tools consume enormous amounts of chakra when used, so much so that normal humans would die after using the tools for only a short period of time. When the tools later came into the possession of Kumogakure, only the Gold and Silver Brothers had the large chakra reserves necessary to constantly wield the treasures without fatal repercussions. While not in use, Kinkaku had the fan stored within his own body, drawing it from his mouth when needed.

Kinkaku still possessed the Bashōsen when reincarnated by Kabuto Yakushi, but dropped it during battle against Darui. After Kinkaku was sealed away, Tenten found the Bashōsen,[2] and used it in battle at least once — destroying Kakuzu's lightning-element mask — before collapsing due to its high chakra absorption.[3]

After the Fourth Shinobi World War, Tenten placed the Benihisago, the Kōkinjō and the Bashōsen on display in her weapons shop.[4] 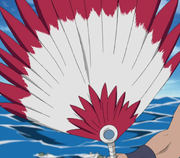