Battle Stadium D.O.N is a Japanese fighting game for the GameCube and PlayStation 2 featuring characters from the popular anime and manga series Dragon Ball Z, One Piece, and Naruto, hence the D.O.N.

Similar to the Super Smash Bros. series, the players are put onto either a moving or non-moving stage. Borrowing from Power Stone, these stages have some level of interactivity. Players must then fight their opponents. Unlike other fighters, D.O.N uses a combined health gauge, that is, decreasing the health of one player will in turn increase the health of the other players via picking up red orbs dropped from the target(s) hit (which can be picked by any player to fill their own HP bar). Thus, in order for one player to win a fight, they must make their own health bar take up the entire bar. As such, a fight can potentially last indefinitely if no time limit is set; the one with the longer HP bar in a timed-match wins the fight in that scenario.

Each character has 6 basic attacks (4 on the ground, one while dashing and one while in midair; though there are some exceptions like Kakashi), along with 7 total strong attacks that are usually akin to special moves (i.e. Kamehameha for Goku and Summoning Technique for Naruto); each character can also perform throws as well as a Super Attack that can be charged up and uses a set amount of a metre that passively refills or can be filled by picking up food items; the said metre is also used for charging up strong attacks, shielding and rolling. However, having it empty will cause a staggering guard break.

In addition, some characters can induce a temporary transformation during the battle (i.e. Sasuke's Sharingan and Luffy's Gear 2nd) via having their portion of the HP bar fill up, where it induces a "Burst Mode" for the remainder of the HP threshold (this can apply to team matches where more than one member can enter Burst Mode at once) and enables any chargeable attacks to reach their full stage with no charging, though the said mode can end when another opposing HP threshold overrides it; this in turn can allow for a "Reverse Attack" to happen, where using a counter-based attack (or counter-hitting) a Burst Mode-powered character during any of their strong attacks will cause massive red orbs that can be picked up which will evenly distribute among the available fighters.

The single player mode has the player fight through five rounds, 2 or 3 of which have missions with goals selected randomly. However, depending on the difficulty chosen by the player, different amounts of missions are given out with easy giving the least and very difficult giving out the most. Fulfilling the missions' goals rewards the player with coins that can be used in the slot machine available upon completing the fights. The slot machine is the way through which unlockables are obtained. There are also items which you can buy to help the characters in battle.

Up to four players can participate in a multiplayer session, though a multitap must be used for more than two players for the PS2 version.

Many of the stages have interactivity of some sort. Items and power-ups from each series are also found in the stages.

This game received a rating of 28/40 from Weekly Famitsu. 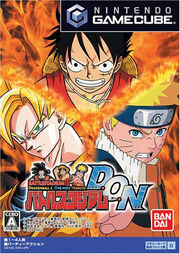