Battle of the Death inside the Water Prison!! (水牢の死闘!!, Suirō no Shitō!!) is volume 50 of the Naruto manga.

Even with his arm having been ignited by Amaterasu, the Fourth Raikage continues to attack Sasuke. Gaara appears and prevents the two from engaging further. He asks for a chance to speak with Sasuke, which will also give the Raikage an opportunity to deal with his arm. Gaara discourages Sasuke from a life of hate, citing his own experiences as proof that doing so won't solve anything. Sasuke rejects Gaara's suggestion that he can turn back. Gaara sheds tears for him. When Temari and Kankurō point out that if Sasuke could be convinced Naruto wouldn't have failed and that Sasuke isn't Gaara, Gaara, the Sunagakure bodyguards (Kankurō and Temari) and the Kumogakure bodyguard attack him simultaneously. Sasuke further develops his Susanoo to protect himself from harm.

Sasuke uses Susanoo to destroy the room. As the Sunagakure and Kumogakure ninja avoid the falling debris, Sasuke finds Karin. He has her lead the way to Danzō, leaving the rest of Taka behind. The Sunagakure and Kumogakure delegations follow. When Sasuke arrives in the room where the Kage Summit was held, he is immediately attacked by Mifune. Danzō takes this opportunity to flee with his bodyguards and Ao follows them. Sasuke tries to follow too, but he is drawn into a battle with the Fifth Mizukage.

The Fifth Mizukage assaults Sasuke with her Lava Release and Boil Release attacks. Already exhausted from his fight with the Fourth Raikage, Sasuke has difficulty enduring the destructive nature of her techniques. Zetsu begins to sprout from the Mizukage and her allies, giving their chakra to Sasuke. Rejuvenated, Sasuke tries to resume his search for Danzō. He is attacked by the Third Tsuchikage and apparently killed. Tobi appears and, carrying an unconscious Sasuke, proves this false. He offers to tell the Kage about his Eye of the Moon Plan.

Sakura departs from Konoha with Sai, Kiba, and Lee, off to find and speak with Naruto. In the Land of Iron, Tobi sends Sasuke and Karin away. He then tells the Kage that Akatsuki seeks the tailed beasts for the good of the world. The beasts were created centuries ago when the Sage of the Six Paths split up the immense power of the Ten-Tails. If Tobi recombines the tailed beasts into the original Ten-Tails and seals the Ten-Tails within his body, he will be able to place an illusion over the entire world and end all wars. He asks the Kage to help him achieve this goal by giving him Naruto and Killer B (in doing so revealing that B was never captured). They refuse, so he declares the start of the Fourth Shinobi World War.

With the Fourth Shinobi World War declared, Tobi leaves. The Kage return to the idea of joining forces to fight Akatsuki. Because of Danzō's actions, Konoha will not be permitted to join them until a new Hokage is found, preferably Kakashi. Although Killer B and Naruto would be valuable assets in the war effort as Ōnoki states, the other three Kage believe putting them on the battlefield would make it too easy for Akatsuki to capture them. The Kage agree to dedicate all necessary resources to protecting them both. Naruto's training with senjutsu is interrupted by the arrival of Sakura's group, so that she may speak with him. Meanwhile, B begins to learn how to become a better singer from Sabu. They are interrupted by the arrival of Kisame.

Kisame and Killer B begin to fight. Elsewhere, the Fourth Raikage is put in charge of the Shinobi Alliance before he and the other Kage return to their villages to prepare for the battles ahead. Ao also continues his pursuit of Danzō, but he falls into a trap and his body is taken over by Fū Yamanaka. Meanwhile, Sakura and her entourage locate Naruto in the Land of Iron. She avoids telling him that their friends in Konoha have decided to kill Sasuke. Instead, Sakura tells Naruto that she no longer has feelings for Sasuke and that she now loves him. Naruto accuses her of lying to herself.

Sakura refutes Naruto's claim that she is lying. Although Naruto points out that she would not come to the Land of Iron just to tell him she loved him, Sakura insists it is true. She encourages Naruto to give up on trying to bring Sasuke back to Konoha for her, but he states that that is no longer his main reason for looking for Sasuke. Sakura leaves without another word. She then starts her own search for Sasuke, unaware that Sai is leaving behind an ink clone. Elsewhere, the battle between Kisame and Killer B starts to heat up. B tries various times to attack Kisame, but Kisame's Samehada absorbs his chakra before any of the attacks can connect.

Fū Yamanaka, in control of Ao's body, tries to remove his Byakugan. Various defences prevent him removing the eye directly, so he tries to cut off Ao's head instead. Elsewhere, Killer B continues to attack Kisame, and Samehada continues to absorb and grow stronger from his chakra. By tapping into the Eight-Tails' chakra, B is able to strike Kisame before Samehada can stop him. Kisame is badly injured, but by fusing with Samehada the damage is repaired.

Kisame being more agile in water once fused with Samehada; creates a large water dome to fight Killer B within. B cannot survive under water for long and Samehada continues to absorb his chakra, so he tries to escape, but is followed and attacked by Kisame. Once B is exhausted, Kisame separates from Samehada and tries to cut off B's legs to make him easier to carry. Samehada, having grown fond of B's chakra, stops him and protects B, even giving him back some of his chakra. Kisame kicks it away and tries once again to cut off B's legs.

Kisame is stopped from harming Killer B by the Fourth Raikage, drawn to the site of the water dome Kisame created earlier. Samehada restores B's chakra reserves, allowing him and the Raikage to team up and decapitate Kisame before he could use another technique. In the Land of Iron, Suigetsu and Jūgo are captured while Ao is elsewhere saved from death by the Fifth Mizukage. Fū Yamanaka, still in control of Ao's body, asks the Mizukage to help him remove the Byakugan's defences. This alerts her to Ao's predicament, forcing Fū to relinquish control. Meanwhile, Sai's ink clone approaches Naruto to tell him what Sakura could not. 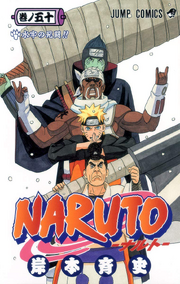