Team Guy continues to fight with their clones, and Guy notices that there seems to be no more noise emanating from the Akatsuki hideout. Neji uses his Byakugan and verifies to the team that Sakura and Chiyo have managed to defeat Sasori. However, because the clones still exist, Neji theorises that perhaps it must have been Deidara who cast the jutsu, although he also adds the possibility that even if the caster is defeated, the jutsu will still continue.

Back in the cave, Sakura heads to the exit to the cave as Chiyo collapses, due to the poison in her system. Having no more antidote on her, she tells Chiyo that they should rush back to Sunagakure, where she will send a request to Konoha to send her the materials she needs to make more antidote. Chiyo, however, does not wish to return yet, as she believes she has not finished with her duty yet.

Outside, Naruto and Kakashi continue to pursue Deidara, the latter now wielding his Mangekyō Sharingan. Naruto tells Kakashi that even his newfound Sharingan technique does not work, he himself will find a way to defeat Deidara. Meanwhile, Team Guy continues to fight their clones, although they get beaten as their clones seem stronger. Neji tells them that the clones have not gotten stronger, but that they have gotten weaker. Since they are of flesh and blood, they can get tired and exhausted, but the clones have no such drawbacks. Lee, however, theorises that since the clones maintain the exact same level of strength as they had the moment they ripped off the seals, then they would simply need to be stronger than they were then. Tenten finds the idea of gaining extra strength in a short time ludicrous, but Lee recalls back to their training days, where their team motto was to be stronger than they were yesterday. Lee tells them that his own personal credo is to be stronger than he was a minute ago, and manages to use Youth Full Power to defeat his clone. Tenten uses Manipulated Tools: Heavenly Chain Disaster, which is a stronger version of her Twin Rising Dragons technique, to impale her clone; Guy uses Leaf Great Flash to take down his clone; and Neji uses Eight Trigrams Mountain Crusher, which is a stronger version of his Eight Trigrams Vacuum Palm, to send his clone flying through a boulder, defeating it. 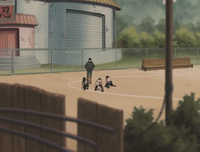