"The Shinobi of Konohagakure…!!"

As their chakra is slowly consumed by Jirōbō, Shikamaru analyses the damage that Kiba is doing to their rock prison in his attempts to break out. He offers to give up the others if Jirōbō will let him go, but Jirōbō refuses. Most of the Sasuke Recovery Team concludes he is a traitor but Chōji, trusting Shikamaru, recognises that he has a plan. Shikamaru informs them that, although their prison repairs itself, the process is slowed at the point furthest from Jirōbō. With the help of Neji they are able to pinpoint the slowest repairing point. Ashamed for doubting him, the team focuses their attacks on that area and are able to escape. 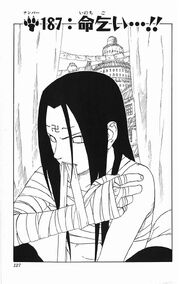