In the anime, Bekkō and Iwana Akame were seen alongside Daikoku Funeno at the Academy, watching Itachi Uchiha get attacked by bullies.[2]

Bekkō has a strong dislike towards Naruto Uzumaki, seen in his support for him being captured and punished for stealing the Scroll of Seals.

Bekkō has spiky brown hair, dark eyes and a broad, relatively flat nose. He wears the standard attire of the Konoha shinobi inclusive of flak jacket and forehead protector along with bandages around his wrists.

Bekkō was one of the many ninja who gather to track down Naruto Uzumaki after he stole the Scroll of Seals from the Hokage's residence. 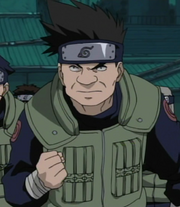