Blaze Release: Kagutsuchi is a technique which applies shape transformation to the black flames of Amaterasu, allowing the user to manipulate them at will. In Sasuke Uchiha's case, while Amaterasu is cast from his left eye, he uses his right eye to manipulate the flames.[2]

The user can shape the flames in different varieties, for both offence and defence.

Similar to other Mangekyō Sharingan abilities, Kagutsuchi's name is derived from Japanese myth and religion. Kagutsuchi is the God of Fire in Shinto and the one who brought death into the world by burning his mother, Izanami, to death as she gave birth to him. This made his father, Izanagi, kill him with the Sword of Totsuka. 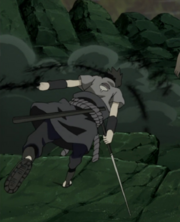