Blaze Release: He with the ability to help by all means with Added Tool Earth Lord

An application of Kagutsuchi through Susanoo, whereby Sasuke produces weapons made from the orb of black flames held in his Susanoo's secondary right hand. 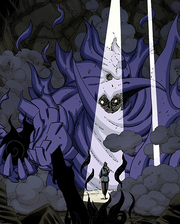