Boruto: Naruto Next Generations (BORUTO -ボルト- -NARUTO NEXT GENERATIONS-, Boruto: Naruto Nekusuto Jenerēshonzu) is a monthly manga series that serves as the official continuation of the Naruto franchise.[1] The first 51 chapters of the series were written by Ukyō Kodachi, with the author of Naruto, Masashi Kishimoto, acting as story supervisor. Beginning with chapter 52 - released in November 2020 - Kodachi left the series and Kishimoto took over writing duties. Mikio Ikemoto has been illustrating the manga throughout its run.[2] The series adapts the story-line of Boruto: Naruto the Movie and then continues the story afterward. The manga launched on May 9, 2016, in the 23rd issue of Weekly Shōnen Jump, and is simultaneously published in Weekly Shonen Jump digital magazine in English. The serialisation of the manga was transferred to V Jump in July 2019.

Kodachi compares the story of Boruto to the Cold War, where a world at peace is threatened by a resumption of its prior chaos.[3] Ikemoto's illustrations for the series are much more realistic than what was used in Naruto, and in fact he is regularly reminded by Kishimoto to make characters' mouths and eyes bigger in order to better align the two series. Ikemoto hopes to conclude the story of Boruto within 30 volumes.[4] Kishimoto, though he has no direct role in the manga's creation, nevertheless oversees each chapter as it's being worked on. When asked if he was worried that new characters in Boruto would come off as clones of their parents, Kishimoto admitted it was a concern. He labelled Shikadai as essentially a clone of his father, while Chōchō is more a combination of her parents; he believes that both characters serve archetypal roles that are common to manga series.[5]

So far, there are five arcs in the manga:

In December 2016, it was announced at the annual Jump Festa that an original anime would begin to air on April 5, 2017 on TV Tokyo.[6] The English dub premiered on September 29, 2018 in the United States on Adult Swim. Kodachi, who supervises the screenwriters of the anime, is responsible for the screenplay of the anime. As such, the several screenwriters submit their stories to him, with Kodachi monitoring everything in the event a scene could dramatically change the characterisation of a character.[7]

So far, there are twenty-two arcs in the anime:

The current timeline of the Boruto: Naruto Next Generations novels.[8] 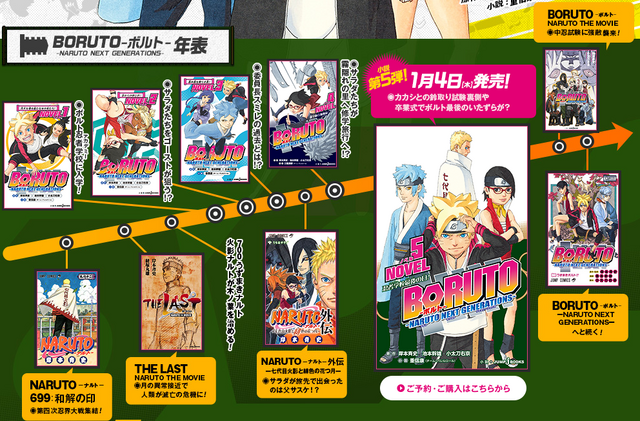