Using the poison removed from Kankurō's body, Sakura makes three antidotes for Sasori's poison, one of which she gives to Kankurō to neutralise any poison still in his system. Conscious again, Kankurō gives Team 7 a piece of Sasori's clothing he obtained during their battle to help them find Gaara's location. Before they leave, Kankurō pleads for Naruto to save his brother. Although Temari is originally to escort Team 7, Chiyo volunteers to go instead, wishing to see Sasori, her grandson. Elsewhere, Sasori and Deidara arrive at an Akatsuki base with Gaara. They meet with their leader, who convenes the other members to extract Shukaku from Gaara's body. 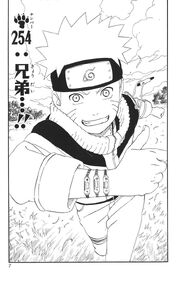