The Byakugan (白眼, literally meaning: White Eye, meaning (Viz): All Seeing White Eye) is a kekkei genkai dōjutsu that originated from the Ōtsutsuki clan. After the Ōtsutsuki settled on Earth,[2] the Byakugan became more commonly associated with the Hyūga clan,[3] descendants of the Ōtsutsuki. It is regarded as one of the "Three Great Dōjutsu", the others being the Sharingan and the Rinnegan.[4]

Unlike dōjutsu such as the Sharingan, which do not manifest until users meet certain conditions,[5] the Byakugan is present from the time of birth. Individuals with the Byakugan are typically identifiable by their unique eyes: the irides are enlarged and white (light lavender in the anime), and there are no distinguishable pupils. When users activate their Byakugan, the pupils become more distinct and the increased blood flow to their eyes causes the veins near their temples to bulge.[1] Some users' Byakugan take on atypical characteristics:

The Byakugan's array of abilities have rendered it highly coveted. Kumogakure has made various attempts to acquire and study the Byakugan over the years, notably during the Hyūga Affair.[10] Ao of Kirigakure was able to acquire a single Byakugan from a Hyūga he defeated,[11] which he goes to great lengths to protect;[12] unlike other dōjutsu that have been transplanted, Ao can activate and deactivate his Byakugan at will.[11] When Danzō Shimura of Konohagakure learns of Ao's Byakugan, he makes immediate plans to either destroy it or take it for himself.[13] In order to prevent the Byakugan from being acquired by enemies, the Hyūga clan developed a practice of applying cursed seals to most of its members; when those branded with the cursed seal die, their Byakugan are destroyed.[10]

The anime implies that simply possessing a Byakugan is not enough to be able to use its powers; even if one is born with visible traits of it, they must undergo intense training before the Byakugan's power can be activated, something not all users can accomplish.[14] The anime likewise shows the Byakugan activating automatically if the user is under stressful circumstances, even if they haven't learned how to activate it on their own.[15] Once a user does become able to use the Byakugan, they must avoid using it excessively, otherwise they will be rendered unable to keep it active until they've taken time to rest.[16]

Individuals with a Byakugan have a near-360º field of vision around themselves, save for a small blindspot at the back of the neck above the first thoracic vertebra.[17] (Mukai, because only his left eye is a Byakugan, also lacks its enhanced sight on his right side.)[18] The Byakugan's vision can penetrate almost any object, allowing users to see through walls,[19] peer underground,[20] or even examine the contents of a person's body.[21] Certain barriers have been shown to block a Byakugan's sight,[22] as have smokescreens that are comprised of a particular mineral dust.[23] Users can focus their vision on anything and everything within the Byakugan's range, allowing them to monitor individuals from afar[24] or to quickly survey a vast area and pinpoint specific locations within that area.[25] The exact range of the Byakugan varies between users, but can be improved with training: in Part I, Neji Hyūga's Byakugan has a range of fifty meters,[26] but by Part II can see at least 800 meters away.[25]

The Byakugan can see chakra to a greater degree than the Sharingan.[3] This enables users to distinguish certain types of clones from their original[27] and even identify specific individuals' chakra signatures.[11] Its ability to see chakra is acute enough to see the chakra pathway system within a target's body and the 361 tenketsu that run along it. The Hyūga have devised the Gentle Fist style of combat to specifically take advantage of this ability, wherein they strike an opponent's tenketsu to either seal or forcibly open them, thus giving the user complete control over their opponent's chakra.[28] In Book of Dark Night, Mukai is able to use the Gentle Fist to carefully split an opponent's chakra-based jutsu so that it harmlessly passes around him.

As a result of the Byakugan's ability to see chakra, users are able to determine if an opponent is currently performing a genjutsu.[29] Similarly, Ao credits his Byakugan for being able to expose that the Fourth Mizukage was under the influence of a genjutsu.[11] But unlike the Sharingan, the Byakugan does not seem to give its users any particular defence against an opponent's genjutsu; in Book of Dark Night, genjutsu is deemed a viable method of capturing Mukai Kohinata, even with his Byakugan. The Byakugan can at least increase the effectiveness of the user's genjutsu, as Kaguya Ōtsutsuki combined her Byakugan's vast range with the Infinite Tsukuyomi in order to subjugate entire nations.[2] Momoshiki claims his Byakugan can read the fate of others, though he lamented it didn't allow him to see his own.[30]

Episodes of the anime have depicted the Byakugan as having a variety of miscellaneous abilities not seen elsewhere in the series:

When an Ōtsutsuki is implanted with the Byakugan of a Hyūga, this combination of the two clans' chakra transforms the Byakugan into Tenseigan. This transformation takes several days to complete, but once achieved the wielder gains several new skills, such as Tenseigan Chakra Mode and Truth-Seeking Balls. The Tenseigan can lose its power and revert back to Byakugan if the user is weakened enough in battle.[34]

In the anime, Urashiki Ōtsutsuki can switch his eyes back and forth between Byakugan and Rinnegan.[35]

The standard appearance of the Byakugan. 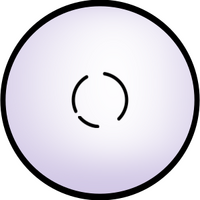