"From the Bottom of My Heart"

Amado is surprised Ada is alive. She mocks him, and Shikamaru notices Amado is terrified, wondering who and what Ada is. Considering her an enemy as she's with Code, Delta prepares to kick her with her free leg, but stops before hitting Ada. Ada points out Delta is flashing her. She obeys Ada as she commands her to release Code, shocking Shikamaru. He asks Delta what's happening, but she has no idea. Shikamaru asks Ino for backup. Sasuke apologises to Boruto for failing to keep his promise when Momoshiki took him over, which forced Kawaki to take on that role. Sasuke explains only a few people know Kawaki killed him, which he considers fortunate as many already disapprove of Kawaki. Boruto thinks they shouldn't hate Kawaki as he asked for it, but Sasuke counters that whoever kills him will be hated. Boruto says he could only have asked Kawaki, and Kawaki was only able to do it because they're brothers. Boruto thanks Sasuke for his forehead protector, which helped firm his resolve and attempts to return it. Since it helped, Sasuke gifts it to him, even if Boruto thinks it's precious memento between Sasuke and Naruto. Boruto puts it on, elated.

Sasuke is concerned he'll be the next to have to show resolve. Sarada and Mitsuki watch from afar, wondering what they're talking about. They think Boruto could have died, and Mitsuki gets chills thinking of being absent when Boruto needed help, and wonders what he'd do if someone tried to kill him. Sarada feels a mix of shock, relief, and anger over what happened. She doesn't blame Boruto, but wonders if they're so undependable. Mitsuki asks if Sarada likes Boruto, catching her off guard, and she says her wanting to do more for him is independent on the presence or absence of feelings. She points out Mitsuki's eyes light up when it comes to Boruto, and complains that Sasuke is her father first before being Boruto's teacher. Mitsuki says they need to get stronger to face the Ōtsutsuki, and she adds she also needs it to be Hokage. Kawaki wakes up in a room with Sumire and Naruto, who comments it reminds him of the first time they met. He asks Naruto if he came to talk about old memories, and Naruto asks Sumire to have her leave the room. Before she leaves, he asks Naruto if he condemns him for killing Boruto, shocking her. Naruto reveals Boruto is alive thanks to the Kāma. Naruto is thankful he was there, otherwise they might all be dead, and adds that Boruto feels the same. As Naruto assures Kawaki he belongs in Konoha, Ino contacts him and Sasuke, reporting Code and Ada's invasion. Sasuke tells Boruto of the attack, and the two move out. Naruto claims to have forgotten an urgent matter, and confirms to Sumire that Boruto is fine. Kawaki focuses on his Kāma, manifesting Isshiki's dōjutsu. Shikamaru paralyses Ada, who is surprised he can take action against her, reasoning it's possible because his attack inflicts no harm. Shikamaru notices they're all experiencing consequences of Ada's ability, and asks Ino to connect with him Amado, which she does. He informs Amado of their communication, and warns him not to give it away, before asking about Ada and her ability. Amado informs him they're all Ada's captives, having been enchanted by her, that Ada herself has no control over it, and the effect lasts until she dies. Delta is infatuated with her. Shikamaru wants to kill her, but Amado says it's futile. She tells him to relax, and he struggles to maintain his jutsu, his will impressing her. Amado warns him that resistance might damage his mind. He drops his kunai and releases his jutsu. Shikamaru thinks of the danger if Naruto and Sasuke would come into the room. Code begins torturing Amado. Shikamaru asks Ada her motive, if she has a grudge against Konoha. She answers Code's reasons are personal to him, and admits she's helping him because she likes Kawaki. In exchange for helping restore his power, he'll help her with Kawaki. Shikamaru asks Ino to change to access codes to the room, and stall the backups he requested. Ada thinks Shikamaru finds her foolish, but he says he's just surprise, and makes a proposition to her. If she comes over to Konoha, they can help each other, and she can tell Kawaki how she feels. Code is shocked by it. 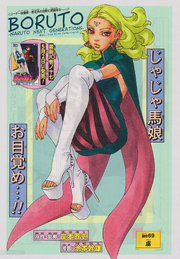