She is a citizen of Konohagakure, the mother of Chōji Akimichi, and the wife of Chōza Akimichi. She is also a member of the Allied Mothers Force.

According to Shikamaru, she is a nice woman, who lets Chōji eat what he pleases. She is also very caring as shown when she fusses over Shikamaru's well-being after Asuma's death while she was on the brink of tears. She is also fierce, protective, and loyal, as seen when fighting the Sumo Wrestlers.

She is a full-bodied woman with short, black hair and eyes which are accentuated by orange markings at each corner. She also wear a light shade of lipstick, a pair of red, stud earrings along with a high-collared Chinese purple blouse which has gold trimmings and the clan's obligatory kanji for "food" (食, shoku) on the back, a pair of pants, and heeled sandals.

Though it is unknown if she is a kunoichi, she has shown to be very strong, beating the Sumo Wrestlers with her bare fists and being the only mother to fight without using cookware.[1]

She first appears when Shikamaru goes to the Akimichi household. She later comforts Shikamaru over Asuma's death, while on the brink of tears herself.

With the majority of the shinobi away from the village, Ebisu gathered the women and children of Konoha where he discussed their current situation. When the Sumo Wrestlers later attacked the village, she, and the other mothers drove them off by force and watched on as Konohamaru defeated them with a Rasengan.[1]

She first appeared, along with her husband, congratulating their son Chōji and promising him by writing a recommendation letter for the promotion for the latter to become a jōnin. 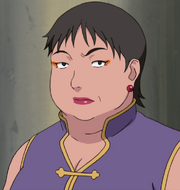