Chūkaku (中覚, Chūkaku) was a ninja monk from the Fire Temple and the mentor of Chiriku.

A ninja monk and scholar, Chūkaku taught Chiriku sometime before his death and was eventually interred at the cemetery in the Fire Temple. Kabuto would later reincarnate him by accident while looking for Chiriku.

Being very calm and seemingly enlightened man, Chūkaku opposed violence, but like many of the other reincarnated shinobi, resigned himself to his fate. He claimed to have been quite ignorant in life, he was first shown meditating most of the time while watching others in battle.

Chūkaku was a short, thin man with a bald head, a long and thin grey beard, large protruding ears, he also had dark eyes and possessed several wrinkles on the forehead, around the eyes and nose. When reincarnated he had a grey sclera, a common feature among reincarnated individuals, and broad features. He wore the typical white and dark grey garb of ninja monks.

While claiming not to be as powerful as his student, Chūkaku instead possessed knowledge on sealing techniques' formulas. He also displayed an ability where he could use a set of rosary beads to nearly undo the seal on the Third Raikage before being ambushed and sealed.

During the Fourth Shinobi World War, Kabuto deployed Chūkaku, who he saw as one of his weaker assets, in an attempt to unseal his other, stronger pawns. While attempting to undo the seal holding the Third Raikage, Chūkaku was attacked by Temari and sealed by the Fourth Division.

Later, when the Impure World Reincarnation Technique was cancelled, Chūkaku's soul returned to the afterlife. 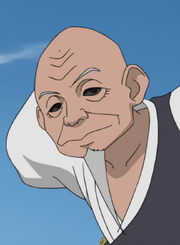