Although it may appear to be a simple case of superhuman strength, this is actually an application of the precise chakra control that is used in medical ninjutsu. The user gathers a dense concentration of chakra in their fist that they release on contact with a target. The resulting damage is enough to seriously damage living targets and will likely also do some collateral damage to the surroundings. Ground that is affected by this jutsu fractures and sends small, flower petal-size particles into the air, hence the name.[1] 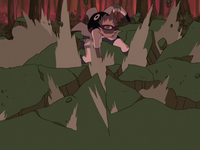