Since their Chidori and Rasengan are somewhat of equal power, Sasuke and Naruto are flung apart. Sasuke is angry that Naruto could match him, while Naruto is disappointed to find that Sasuke really did intend to kill him. As he tries to come to terms with this, he is attacked by Sasuke, who wants to finish the battle quickly. Naruto dodges and reflects on the long rivalry he has had with Sasuke as well as the fact that he was always secretly been jealous too. When Sasuke catches Naruto and prepares a finishing blow, Naruto, wondering if they were ever really friends, begins using the Nine-Tails' chakra. 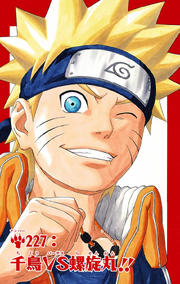