The Right Job for Idiots and Bastards (#15)

Boruto is interviewed for his role in saving Konoha from Isshiki Ōtsutsuki, uncomfortable and wishing for the interview to be over soon. Amado performs maintenance on Kawaki after restoring his arm, aided by Katasuke and Sumire. He explains why and how he was able to restore Kawaki's arm. Katasuke explains Sumire volunteered for the job. Sumire is embarrassed when Kawaki asks if she likes Boruto. Before Kawaki leaves, Amado considers asking him something, but postpones it for his next maintenance. Sarada, Mitsuki, and Team 10 discuss the protocols and restrictions placed on Boruto and Team 7. Kawaki visits Boruto at the Hokage Rock. They revise their status and what they know. Kawaki hypothesises that Boruto could make a vessel of his own by branding someone else with a Kāma, so he would also be resurrected in another body if Momoshiki resurrects in his.

Boruto objects to sacrificing someone else, but Kawaki suggests Code. Amado tells Naruto about Code, the last Kara Inner left active. He explains that Code was left in charge of the Ten-Tails, another pressing issue. Shikamaru points out they no longer have reliable means of reaching its dimension and returning. Amado confirms Code can freely reach it through abilities other than space-time ninjutsu. They want to prioritise dealing with Code so they have time to deal with the Ten-Tails, but Amado warns them Code is special. Code arrives at a facility of Boro's cult, the guards unwilling to let him in. Kawaki tells Boruto that after he survived receiving his Kāma, Code was also given one, and despite now becoming a vessel, his compatibility with Kāma allowed him to survive. Boro's guards attack Code, who evades their attacks and counterattacks creating and emerging from black bands, killing them and entering the facility. Amado remains wary of Code over their lack of knowledge on Kāma, and reveals that unlike other Kara members, Code allowed his body to be modified to be made weaker as not to undermine Jigen's authority. Code worshipped the Ōtsutsuki as gods, which extended to Jigen, and envies Kawaki's status as a legitimate vessel. Amado reveals he created several cyborgs stronger than Jigen, but disposed of them per Jigen's orders and created Koji Kashin instead. He surmises that Code will seek retribution if he learns Isshiki was defeated, and is concerned that Code will come for him to release the limiters in his body. Naruto wants Shikamaru to prepare for a Five Kage Summit to reveal what they know. Boruto considers Kawaki's suggestion that becoming Ōtsutsuki means they'd have access to their jutsu. He questions if it's even possible to give Code another Kāma. Kawaki stresses that Jigen wouldn't have gone to such trouble if Kāma were easy to stick, so it's logical to try on someone who already survived and isn't someone else's vessel. He also counters Boruto's hesitation of forcing it on someone else by pointing out Code is stronger than Delta and Boro. Aware his father no longer has Kurama, Boruto decides to step up and train. Code greets Outer Bug, and informs him of Jigen and Boro's deaths. He asks about Ada, to Bug's surprise. Code is aware that Boro stored several cyborgs Jigen ordered to be disposed. Unable to refuse him, Bug takes Code to a containment unit with Ada, who he identifies as one who knows everything in the world. 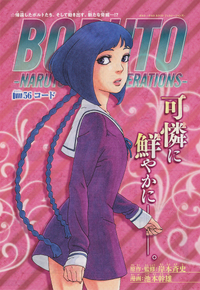