By overlapping the Rasengan as it is formed in the dominant hand with the other hand, the user compresses and condenses it to its limit. In this state, it can penetrate targets with little resistance. Even if the impact is reduced by a strong defence to the point of making it non-lethal, it can still knock out powerful opponents. At the same time, its compressed nature can cause severe recoil, greatly straining the user's arm, making it dangerous to use often. 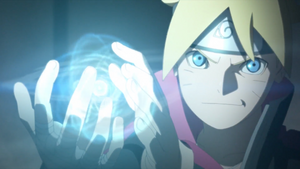