Code Arc
"Control" (, Kontorōru) is chapter 64 of the Boruto manga.

Code is pleased by Boruto's drawing on his Kāma's power. Recalling Momoshiki's taunting, Kawaki insults him. Code is curious by how Momoshiki's consciousness can emerge while Boruto remains only a vessel. They are surprised to notice Boruto is still in control as he cautions Kawaki to stay back. Boruto attacks with shadow clones, and Code notices his increased strength. He places a mark on Boruto and uses it to avoid attacks and launch his own at the clones. Boruto manages to pull Code through his mark with the help of a clone and lands a punch. Code puts distance between them, and Kawaki wonders how Boruto is in control and stronger than before. Code consults Ada, who while unsure of what's happening in Boruto's body, speculates it might be due to Amado's drugs, and warns him not to underestimate Boruto. Naruto instructs Ino to look for Boruto's chakra instead of Kawaki's. Shikamaru arrives, concerned that the enemy might be where they are as well, and clarifies he'll be going with Naruto, as he no longer has Kurama's power.

He further justifies it with Sasuke still being away tracking Code, and Sai being busy guarding Amado. Hinata wants to join them, but Naruto wants her to stay with Himawari. Himawari asks Naruto to come home safe with Boruto and Kawaki. Naruto reassures her while entering Sage Mode. Boruto attempts to absorb Code's marks in vain. Kawaki explains that while they're mostly chakra based, there's enough iron from Code's blood in them to make them physical matter that Kāma can't absorb. He asks Boruto about Momoshiki, who also speculates Amado's medicine might be responsible for him not emerging. Boruto wants to focus on taking Code down. Code comments that regardless of medicine, they can't get rid of Momoshiki, and that whoever he is, he's still an Ōtsutsuki, and as a quality sacrifice, should produce a fine God Tree. Boruto notices Code's knowledge of Amado's drugs. Code decides to grab Boruto when his maturation is almost complete, and moves through his marks to grab Kawaki for Ada. Kawaki attacks Code with a shadow clone, forcing him to move through a mark to escape Boruto's Rasengan. Code comments on Kawaki's change of heart, who explains all he does is for Naruto, Boruto adding that taking him down now would be the most expedient thing to do. He and Code exchange insults. Naruto in Sage Mode finds Boruto and an unidentified chakra, and coordinates with Ino. Naruto and Shikamaru move out, Naruto leaving behind two shadow clones gathering natural energy. He assuages Shikamaru's concern about the duration of Sage Mode, and Shikamaru in turn asks him not to overdo it. Code and Boruto fight, Code narrowly avoiding Boruto's Vanishing Rasengan. Ada tells Code to stop fooling around. Boruto suddenly collapses in pain. 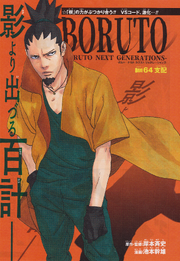