The Corpse Clone Technique is a kinjutsu that allows the user to assume the identity of their victims. By opening their mouth wide, akin to a snake, the user will consume the target's living brain. After which, the user gains the victim's memories, abilities, and can take on their physical likeness perfectly. This technique is perfect for infiltration and spying leaving targets none the wiser as the user becomes a perfect replica. In the anime, the changes are implied to not require upkeeping once performed, as Shojoji was able to keep impersonating Tsukiyo at Hōzuki Castle, despite being branded with Fire Release: Heavenly Prison, which prevents one from using chakra. 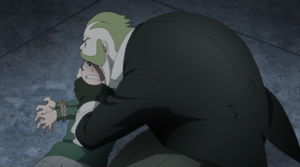