The user instills their chakra into a doll which absorbs chakra of a nearby individual and takes human form. Naruto Uzumaki was assigned by the Curse Jutsu Master to defeat and collect the curse dolls of the Curse Jutsu Master's friend which have taken the appearance of most of the characters in the game and had gone acting violently. His friend meant to make the beings that could labour indefinitely which turned into a failure though the Curse Jutsu Master revealed that this was a lie and that he scattered the dolls to create the ultimate ninja.
Polski
Community content is available under CC-BY-SA unless otherwise noted.
... more about "Cursed Doll"
RDF feed
Appears in
Game +
Debut game
Naruto Shippūden: Ultimate Ninja Storm 2 +
Jutsu class type
Supplementary +
Jutsu classification
Juinjutsu +, Ninjutsu +, Clone Techniques +  and Chakra Absorption Techniques +
Maintenance
Kanji +
Picture 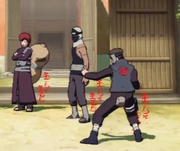