Daimaru (ダイマル, Daimaru) was a shinobi from Sunagakure.

Daimaru was a young shinobi from Sunagakure who grew up alongside Temari. He quickly fell in love with her, seemingly not intimidated by her relation to the Fourth Kazekage or Gaara. Because he couldn't express his interest in her, he used to bully her as an alternate means to get her attention. Some time later, Daimaru died during a C-rank mission.

Daimaru was a highly animated individual in terms of personality. He was over-the-top with his expressions and thought very highly of himself, referring to himself as the Red Sand Cloud (赤砂塵, Akasajin, English: Red Cloud of the Dust). He disliked being ordered around and also expressed a dislike towards Konoha shinobi such as Torune. Likewise, he apparently had a very strong will, able to resist Kabuto's control over his reincarnation and chose not to fight.

When faced with Temari, he readily confessed his feelings for her thinking he had nothing to lose, which some kunoichi near them found him cute and that his feelings deserved a better chance. In a attempt to hug her, Daimaru was thrown against a rock with great force, despite being rejected, he still took it good-naturedly, even saying farewell to Temari with a smile and waving to her as he was sealed. His infatuation with Temari was so great he was not the least bit intimidated by her being Rasa's daughter or Gaara's sister back when he was completely ruthless.

Daimaru was a fairly plain looking man with light purple eyes and light brown hair, which was covered by bandages and his purple forehead protector. He wore the standard uniform for Sunagakure shinobi with a hoodie underneath his flak jacket.

While deemed a failure for a reincarnation, Daimaru showed fairly capable skill. Not reckless in battle, he was one of the last "failures" to be sealed. He was skilled in using Earth Release to manipulate sand, altering the landscape with it.

During the Fourth Shinobi World War, Kabuto deployed Daimaru, who he saw as one of his weaker assets, in an attempt to unseal his other, stronger pawns. Arriving at the Third Raikage's sealing site, Daimaru shifted the sandy terrain to unset traps left behind by the Allied Shinobi Forces. When they arrived, Daimaru quickly went to see Temari, who he declared his love for after deciding that he had nothing left to lose due to being dead. In the end, Daimaru allowed himself to be sealed.

Later, when the Impure World Reincarnation Technique was cancelled, his soul was returned to the afterlife. 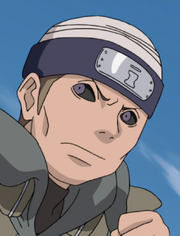