Boro is able to unleash a dark mist that eats away at the bodies of those exposed to it either through physical contact or by inhaling, sapping their strength and gradually rendering them paralysed. The mist serves as an effective deterrent to keep opponents from approaching, and will quickly return to its position if it was cleared through the use of Wind Release techniques.[1] Additionally, since the mist is a form of physical matter rather than a chakra-based substance, it cannot be absorbed by Kāma, as the dark mist's true nature is that of a fast-acting virus created by scientific ninja tools. Boro has antibodies in his body that grant him immunity to the virus, and by acquiring his blood, it is possible to harvest and culture these antibodies in order to inject them into others.[2] The mist can also be mixed with gunpowder, which can be detonated with the slightest spark.[3] 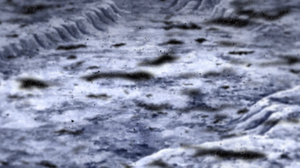