The Daytime Tiger is an incredibly fast punch and, contrary to its appearance, purely taijutsu in nature.[2]

After opening the seventh of the Eight Gates, the user places a palm facing forward in front of their face with one hand and then taps it with his other hand, formed into a fist, which creates a massive amount of air pressure. Next, the user forms a unique hand seal resembling a tiger. This launches the air pressure at the opponent in the shape of one by leaving a gigantic tiger-shaped impression into the initially built-up air pressure with the hand seal. The air pressure will condense as it's moving and be focused into a single point. The technique then explodes on command, releasing the built up air pressure in an instant. A massive explosion — one that dwarfs Island Turtle — is created which can be felt a significant distance away.[3] 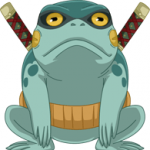