The Dead Demon Consuming Seal is a sealing technique developed by the Uzumaki clan to call upon the power of the Shinigami.[2] Its very existence is so secret that even Orochimaru knew nothing about it.[1]

While the Shinigami grabs their soul, the target is immobilised, any jutsu they may be using are dispelled,[3] and they are prevented from performing additional jutsu.[5] With targets unable to escape or fight back, the summoner can remove and seal their soul. Hiruzen was able to seal multiple souls by using this technique in conjunction with the Shadow Clone Technique.[3] The sealing, however, is not necessarily complete nor automatic:

The target's soul is sealed within the body of the summoner, represented by a swirl pattern on their torso that is similar in appearance to the Eight Trigrams Sealing Style.[3] In Minato's case, this sealing of the Nine-Tails' yin chakra into himself makes him its jinchūriki.[9] With the sealing completed, the Shinigami gradually starts consuming the summoner's soul.[8] The summoner can, with difficulty, continue moving and speaking, allowing them to finish any lingering business they may have, but they will die as soon as their soul has been fully consumed.[4] The souls of the summoner and their victim do not pass on to the Pure Land,[10] instead being trapped within the Shinigami's stomach, destined to fight each other for all eternity.[5]

Although Orochimaru survives the sealing of his arms, his arms are paralysed, causing them to hang uselessly at his sides. This prevents him from performing hand seals and by extension most ninjutsu.[8] With time, he's able to regain limited use of the arms, but he's still left with a constant and extreme pain.[11] Orochimaru believes that Tsunade could heal his arms - something Tsunade does not deny - but she refuses to help him.[12] Ultimately, after his arms begin to rot, Orochimaru is forced to switch bodies or risk death.[13] He is able to make better use of the new body's arms,[14] but the jutsu he can use remain limited so long as his soul's arms are sealed within the Shinigami.[15]

Souls can only be freed from the Shinigami's stomach by using Dead Demon Consuming Seal: Release (屍鬼封尽・解, Shiki Fūjin: Kai, English TV: Reaper Death Seal: Release). To use, an individual wears the Shinigami Mask, causing them to become possessed by the Shinigami. If the individual wearing the mask slices open their own stomach, the Shinigami will do the same, and any souls inside it will be freed. However, the mask doesn't have any properties that will prevent its user from dying of that injury; when Orochimaru uses this to restore his arms, he survives the injury by switching bodies once again. With the other souls he frees from the Shinigami, Orochimaru is able to use the Impure World Reincarnation.[15] 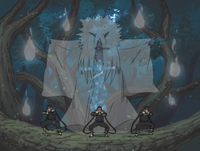