"C2 Driving against the Wall!!"

Kabuto reveals that Orochimaru's remains constantly try to gain control of his body, a struggle that only makes him stronger. He flees before Naruto and his escorts can capture him, saying he will gladly fight Naruto after he has avenged Orochimaru by killing Sasuke. Meanwhile, Sasuke attacks Deidara and Tobi. Although he strikes Tobi, the attack has no effect. Deidara counters with his clay explosives, but Sasuke deflects them with his Chidori Senbon. Deidara decides to give his C2 a try. 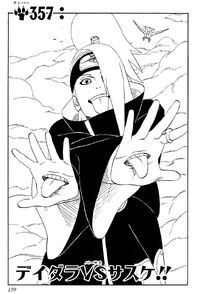