Dosu Kinuta (ドス・キヌタ, Dosu Kinuta) was a shinobi of Otogakure and also the unofficial leader of Team Dosu. He participated in the Chūnin Exams under covert orders from Orochimaru.

Dosu was demonstrated to be a very alert and logical ninja. He rarely rushed into anything before first observing and analysing the situation. Dosu seemed very loyal to Orochimaru's cause, to his village, and to a lesser degree, his teammates. When he heard Kabuto claiming their country and village less prestigious, he considered retaliating, requiring Ibiki to threaten his team with failing the exam. Although he claimed that Oto-nin are willing to sacrifice their own teammates for their cause, he promised to avenge Zaku after his debilitating defeat by Shino Aburame. At first, he showed dedication to Orochimaru's task of killing Sasuke Uchiha, but later became disillusioned after learning that Orochimaru had given Sasuke a cursed seal. Realising that he and his team were actually pawns used to determine Sasuke's worth, Dosu's outlook changed as he lost any and all loyalty as well as respect towards Orochimaru and vowed to kill Sasuke for the purpose of undermining Orochimaru. Because of this, he would attempt to take down Gaara prior to the actual match to lessen the obstacles beforehand, a rather rash decision that ultimately cost Dosu his life. He was also described as courteous and reliable.[1]

Dosu had bandages covering most of his face, leaving only his left eye and eyebrow uncovered. He also wore a large poncho with long sleeves, a snake patterned scarf around his neck, a straw raincoat protruding from the back of his scarf, and a large amplifier on his right arm for most of his attacks. His back was hunched, which made him look smaller than he actually was. He had short black buzzcut hair.[2]

Dosu's battle style revolved around his ability to manipulate sound. He had a very keen awareness and understanding of sound-waves. During the first round of the Chūnin Exams, he simply listened to the strokes of other ninja's pencils to determine what they were writing for the written test.[3] His main attack was done with help from the Resonating Echo Speaker on his right forearm, which he used to generate sound for his attacks. His abilities attacked the inner ear, directing his sound deep into it, which would cause great pain, disorientation, vertigo and nausea. During their match, Chōji attempted to block his attacks by pulling his head inside his Human Bullet Tank, only to be thwarted by the fact that, by directing sound through the water in his body, Dosu could still generate the effect, instantly defeating Chōji.[4] Dosu was also quite intelligent, perceiving Sakura's traps and Orochimaru's plan to test Sasuke.[5][6]

Team Dosu travelled to and arrived in Konohagakure to participate in the Chūnin Exam. Before the exam started, Dosu and his team overheard Kabuto dismissing their village as unimportant and decided to attack him because of it. After Zaku threw kunai to distract Kabuto, Dosu ambushed him and attacked with his Resonating Echo Speaker, damaging Kabuto's hearing. To prevent the situation from escalating, the exam proctors, led by Ibiki Morino, appeared and settled things down. After Dosu passed the written portion of the Chūnin Exams by interpreting the sound of others' pencil markings, he moved onto the second phase of the exam alongside his teammates. During the second phase in the Forest of Death, Dosu initiated his team's real mission; killing Sasuke Uchiha.

With Naruto and Sasuke unconscious due to their previous battle with Orochimaru, Sakura Haruno is left to fend on her own. Seeing an opportunity to kill Sasuke, Team Dosu leave their position and attack Sakura, who activates the traps she laid out. Dosu announces that they want to fight Sasuke and tells Sakura to wake him up with Sakura stating that she knows that a man named Orochimaru was pulling the strings which leaves Team Dosu stunned. After getting past the traps, Team Dosu was intercepted by Rock Lee. Dosu recklessly attacked Lee and ended up the victim of his Front Lotus technique. Seeing that his teammate was going to be killed, Zaku softened the ground, leaving Dosu to survive the attack. Suffering from the side effects of using the Front Lotus, Dosu effortlessly defeated Lee. With Lee out of the way, Team Dosu once again advanced towards Sakura, leading to Team 10 intervening. After the fighting began between the two teams, Dosu tried giving aid to Zaku who was fighting against Chōji but was caught in Shikamaru's Shadow Imitation Technique. With Shikamaru's jutsu coming to an end, Lee's teammates arrived. After noticing Neji's Byakugan, Sasuke woke up. Looking on in fear after witnessing Sasuke's curse mark he had received from Orochimaru activate, Zaku attacked the Uchiha before Dosu had the chance to warn him of the situation. After dodging Zaku's attack, Sasuke quickly defeated him and turned his attention towards Dosu. Seeing the predicament his was in, Dosu handed over his scroll to Team 7 and fled with his teammates.

During the preliminaries, Team Dosu reunited with Orochimaru, who was disguised as their Otogakure sensei. After watching Zaku lose his fight against Shino, he vowed to avenge him. During the last match of the preliminaries, he was matched up against Chōji Akimichi. Chōji used his Human Bullet Tank technique with the assumption that he was safe from Dosu's sound technique, but Dosu attacked and defeat him with one blow. After winning his fight, he was assigned to fight Shikamaru Nara during the first round of the finals.

In an effort to make sure that Sasuke survived until they could fight so that he could kill him personally, Dosu challenged Gaara, Sasuke's first opponent, on the roof top of Kikyō Castle to a fight.[7] Despite Dosu's confidence, Gaara promptly killed him, while Baki and Kabuto Yakushi witnessed it.[8]

Dosu Kinuta is a playable character in the following video games: 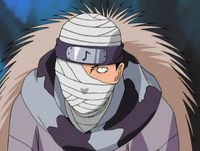