Dust Release: Detachment of the Primitive World Technique is a Kekkei Tōta utilised by the Second and Third Tsuchikage.

The user uses Dust Release to create a structure, with a sphere located at its centre, between the palms of his hands. The structure expands rapidly in size when being propelled towards its intended target and traps them inside its confines. The sphere then seems to explode with a tremendous amount of force, while the exterior walls of the structure effectively restrict the size of the blast radius, resulting in the destruction of everything and anyone caught within as they are pulverised into minute particles of dust. The technique isn't limited to just affecting physical matter; it can also affect chakra-based defences, witnessed from Ōnoki's use of it to destroy Madara Uchiha's Susanoo.[2]

The resulting damage that this technique can produce varies considerably, depending on the initial shape of the created structure. For example, when fabricated in the form of a cube, the structure possesses a relatively small blast radius, minimising the possibility for collateral damage. However, the conical version was implied to be enough to potentially destroy an entire island.[3] Additionally, it is possible to produce a much larger variant of the cube-shaped technique, which was large enough to destroy twenty-five Susanoo-clad wood clones in an instant. This cube can also be split into two after being activated, allowing for other techniques to be directed between the two halves.[4] When two similar techniques of approximately equal power collide, the pair merge into a single large spherical explosion; where everything caught within the substantial blast radius is completely pulverised.[5]

Kakō has shown he could fire off the cubical version of the technique one-handed, which allows him for a rapid-fire attack (albeit the cubes do not expand upon release).[6]

This technique can be manipulated into a diverse selection of three-dimensional structures, including cones, cylinders and cubes, with each retaining a sphere located at their centres. According to Ōnoki, the differences in shape demonstrated by the users of this technique is reflective of the generational gap between them.[5] 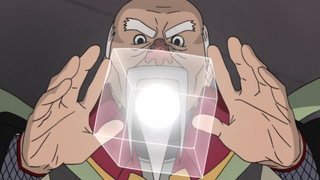 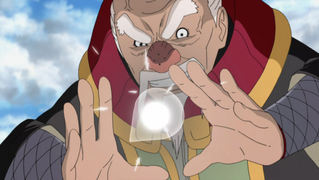 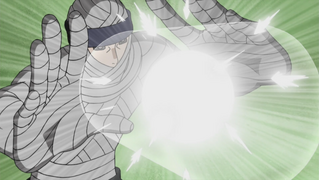