This technique changes earth into fine sand by channelling chakra into it, allowing the user to dig through it like a mole. This effect goes around the body (not just the hands), making it just large enough for a person to move through. The user can pinpoint where they are, despite being underground, by sensing the magnetic forces. They can also sense what is happening on the surface and use that information to launch a surprise attack on the enemy.[2][3][4] One can also hide deep in the ground, escaping to a depth where the enemy can't reach. It also appears that after digging, the ground can be returned to its original state, leaving no trace of where the user entered the earth.[5]

When combined with clone techniques, the user can use the clone to lure their enemies into a trap or false sense of security before launching a surprise attack from below. 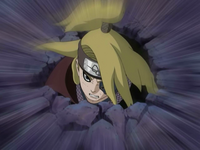