Ebisu (エビス, Ebisu) is a tokubetsu jōnin from Konohagakure who specialises in training elite ninja.[4] He also served as the leader of Team Ebisu, which consisted of Konohamaru Sarutobi, Udon, and Moegi.

When Ebisu became a genin, he was put on a team consisting of Might Guy and Genma Shiranui, under the leadership of Chōza Akimichi.[5] At one point, they were confronted by a generation of Seven Ninja Swordsmen of the Mist only to be saved by Might Duy. During their Chūnin Exams, Ebisu and his team clashed with Team Minato in the Forest of Death where Guy quickly dispatched Obito Uchiha. When Kakashi Hatake is promoted to jōnin some time later, Rin Nohara gathers up the graduating class to plan a top-secret celebration which Ebisu took part in.[6]

Ebisu is portrayed as a stern and "by-the-book" type of person.[7] Initially, he expressed hatred for Naruto Uzumaki,[8] and believed he was nothing but a worthless nuisance and mocked his dream of becoming Hokage as he believes that only people of high lineage could amount to anything. Upon seeing what Naruto had done for Konohamaru his perspective changed drastically,[9] and later the village during Pain's assault on it, he chose not to surrender Naruto's location and would rather be killed.[10] He is also rather attached to his pupils, and has shown immense pride in them, such as when Konohamaru performed the Rasengan on Pain while rescuing Ebisu from the dangerous missing-nin.

While being rather uptight, he has shown a true dedication to his village and students.[10][11] Also, although he tries to be very professional, he has displayed some perverted traits, as shown from how he reacted to Naruto's pervert tactics.[12] He has also been described by Naruto as being a "closet pervert".[13] Ebisu has a tendency to look into female bath houses.[14] When perturbed, Ebisu often pushes his sunglasses up his nose.

Ebisu has been portrayed as having dark hair and brown eyes and is never seen without his trademark sunglasses. Usually he is seen in the standard Konoha shinobi outfit, albeit without the flak jacket. He also wears his forehead protector like a bandanna. When deployed on missions, or if the situation calls for it he will don the flak jacket as part of his outfit.

During his time in the Academy, Ebisu wore his hair swept to the sides of his face and wore a dark suit along with his signature glasses with a thin, brown shawl of sorts around his shoulders with the two ends tied. When he achieved the rank of chūnin, he discarded the shawl, donned the bandanna-like forehead protector as well as a flak jacket.[6][15]

Ebisu is an elite trainer who has an extensive knowledge in basic to advanced forms of ninja skills. According to Kakashi, Ebisu is one of the most skilled trainers in Konoha,[4] further emphasised by him being personally selected to train Konohamaru for the Academy, and was chosen by Kakashi to train Naruto for the Chūnin Exams.[4] Ebisu is particularly skilled in the usage of hand seals.[1]

In the anime, Ebisu is able to perform the Shadow Clone Technique and Fire Release: Fire Dragon Bullet.[16][17] He has also shown to be capable in taijutsu, as seen during his battle against the Naraka Path.[18]

Main article: Prologue — Land of Waves He was first introduced as Konohamaru's tutor, and disliked the fact that Konohamaru idolised Naruto Uzumaki, as he only saw Naruto as the container of the Nine-Tailed Demon Fox. His opinion of Naruto didn't change even after Naruto "defeated" him with the Harem Technique.

Main article: Chūnin Exams Later, after being recommended by Kakashi Hatake as a great teacher and having realised Naruto's influence on Konohamaru has changed him for the better and seeing Naruto has the potential to be a great ninja and not just a host for the Nine-Tails, Ebisu began Naruto's one-month training for the main matches of the Chūnin Exams. Initially starting out by instructing the young man on his poor use of chakra, by being with Naruto and seeing the positive influence he had on Konohamaru, Ebisu realised that Naruto was not just the container of a demon, but was an outstanding Konoha ninja. However, Ebisu did not complete Naruto's training, as Jiraiya took over by summoning a toad to knock Ebisu unconscious after Ebisu tried to interrupt Jiraiya peeking in on the women's bath. Naruto then insisted that Jiraiya take Ebisu's place and complete his training. As Ebisu recognised Jiraiya before he was knocked out, once he woke up he had a brief conversation with him before leaving.

At some point during the time-skip, he was put in charge of a leading a genin team consisting of Konohamaru, Udon and Moegi. After completing their mission to find a lost cat, they returned to the village to receive their payment. When Konohamaru began to complain about being sent on low rank missions, Ebisu scolds him and apologises to the Fifth Hokage for his student's behaviour.

When Konohamaru nearly attracted the attention of the Naraka Path during Pain's assault on Konoha, Ebisu drew the Path's attention to himself so that his student would have a chance to escape. The Path asked him for Naruto Uzumaki's location, but Ebisu, having come to think highly of Naruto, refused at the risk of his life and confronted the Path. Before he could be killed however, Konohamaru arrived to save him, using the Rasengan to attack the Path, much to Ebisu's surprise. Ebisu, alongside the other villagers, though somewhat injured and supported by Konohamaru, celebrated Naruto's victory over Pain.

In the anime, while the Fourth Shinobi World War is ensuing, Ebisu gathers the villagers discerning the probability of an attack on the village. The Allied Mothers Force reassures him that they will be prepared to defend the village. When his team approach him about sightings of giants, missing-nin and a tailed beast (which the two are actually a circus troupe), Ebisu tells them to inform the mothers as they can take care of it.

Main article: Konoha Hiden: The Perfect Day for a Wedding Ebisu is seen at Naruto and Hinata Hyūga's wedding standing beside his pupil, Konohamaru.

Main article: Naruto the Movie: Blood Prison During Naruto's flashback to the members of the village when he was gathering natural energy to enter Sage Mode, Ebisu can be seen amongst the villagers.

Ebisu is a playable character in the following video games:

Masashi Kishimoto noted that unlike Konohamaru, Ebisu was much easier to create and his design was decided upon with the first sketch. He also noted that he quite likes Ebisu's design, but he can't really explain why exactly. 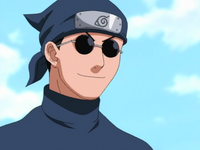