The Eight Gates are eight specific tenketsu along the chakra pathway system.[1]

The Eight Gates exist in order to limit the flow of chakra within an individual's body. Ordinarily, individuals can use no more than 20% of their body's full potential, the brain's way of protecting the individual from harming their body through overexertion. With training, individuals can learn to remove these limiters, referred to as "opening" the gates.[2] With each opened gate, individuals are given access to more and more of their body's chakra, thus increasing their physical strength and speed.[1] Ninja able to open the Eight Gates have existed since at least the time of Madara Uchiha.[3] Since Madara's era, there have only been a few known users:

Learning to open any of the Eight Gates is apparently very difficult, as Kakashi is surprised when he's told that Lee - only thirteen years old at the time - can open five gates; Kakashi notes that such an accomplishment is impossible through hard work alone. Part of Kakashi's surprise is also because he does not believe it was wise for Guy to teach Lee to open the gates in the first place: although opening the gates does briefly give the user power greater than what they're normally capable of, this increased power causes the user serious harm.[1] At a minimum, the user will be fatigued, which can leave them vulnerable to attack if this occurs during combat.[2] In more extreme cases, muscles can tear and bones can break from the strain, which can be treated with medical ninjutsu.[10] When opening the eighth and final gate, users will die as a consequence, their bodies being unable to survive the immense amounts of chakra flowing through them.[1]

Using the Eight Gates is described as a double-edged sword,[1] empowering users by sacrificing their own health and safety; such risks have caused the Eight Gates to be likened to kinjutsu. Because of this, Duy developed a self-rule to dictate when it was acceptable to open any of the Eight Gates, a rule he passed to Guy,[4] and that Guy subsequently passed to Lee: to only open the Eight Gates when protecting something that is precious enough to give one's life.[2] Often this "precious something" is a family member,[4] a loved one,[2] or a teammate.[11] Rock Lee has also been known to use the Eight Gates to defend his nindō, the dream by which he leads his life.[12] 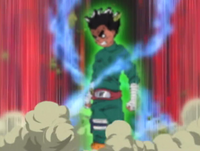