The Eight Trigrams One Hundred Twenty-Eight Palms is a technique of the Gentle Fist fighting style. It is essentially a doubled version of the Eight Trigrams Sixty-Four Palms performed at twice the speed. This technique is used to close off the flow of chakra through one hundred and twenty-eight chakra points of an opponent's Chakra Pathway System. This eliminates their ability to use chakra for quite some time and makes it difficult for them to move. Alternatively, it can be used to hit a great number of targets very quickly.

Once someone is within range of the user's field of divination, they assume a Gentle Fist stance and begin to deliver the attack: 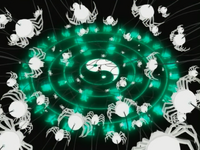