"My Name is Konohamaru!"

Twelve years ago, a vicious tailed beast known as the Nine-Tails attacked the shinobi village of Konohagakure. Many shinobi fought the beast but killed all those standing before it. The Fourth Hokage saved the town by sealing the beast with an infant boy at the cost of his own life.

In the present, Naruto Uzumaki is a prankster who is constantly causing trouble throughout Konohagakure, most recently having placed graffiti all over the Hokage Rock. Much of the village dislikes him, but he enjoys the attention garnered from reprimands, as he had no parents or friends due to the villagers abusing him daily. Despite claiming to be a talented shinobi who would someday become Hokage, Naruto cannot perform basic techniques such as the Clone Technique. When this leaves him unable to graduate from the Academy, one of his instructors, Mizuki, tells Naruto that if he could steal the Scroll of Seals and learn one of its secret techniques, he would be allowed to continue the ranks of the ninja anyway and graduate.

After successfully stealing the scroll, instructor Iruka Umino finds Naruto, who realised that Mizuki had tricked Naruto. Mizuki arrives and asks Naruto for the scroll, to which Iruka ordered Naruto not to, as Mizuki lied and only wanted the scroll for himself. Mizuki then tells Naruto that he wasn't the one lying, explaining since the day he was born, Nine-Tails that had been sealed inside him that the reason the villagers hate him so much. He explains that Iruka must hate him the most because the Nine-tails was the one who killed his parents. However, Iruka refutes the accusation, saying he did not blame Naruto for the beast's actions and that he, having grown up also craving attention, sympathised with him. Naruto believing Iruka, uses his newly-mastered Multiple Shadow Clone Technique to defeat Mizuki.

Amazed by the complicated technique that Naruto has learned, Iruka officially makes Naruto a ninja by giving him his forehead protector. He says that he may one day have the potential to become Hokage. 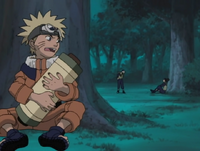