View source
watch 01:32
Wiki Targeted (Entertainment)
Do you like this video?
Play Sound

The Sunagakure ninja celebrate Gaara's revival. Temari and Kankurō thank Naruto for saving their brother, but he tells them they should thank Chiyo instead; when she "wakes up". They then correct him explaining that Chiyo gave her life to resurrect Gaara. Naruto reflects on her final words and realises that Chiyo, like the Third Hokage, sacrificed herself to protect the next generation. Everyone present has a moment of silence for her. Elsewhere, Deidara, having escaped Kakashi and the others, goes looking for his severed arm with his Akatsuki ring. Zetsu and Tobi also search for Sasori's ring, which the latter takes so that he can join the Akatsuki. Tobi then starts to play with the ring, before it accidentally slips through his hand. 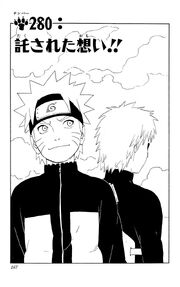