Everyone of Team 7!! (それぞれの第七班!!, Sorezore no Dainanahan!!) is volume 52 of the Naruto manga.

Sasuke attacks Kakashi with Susanoo, which Kakashi blocks with Kamui. Sasuke lashes out at Kakashi for his use of the Sharingan, evidence that Konoha continues to profit from the Uchiha clan's demise. Sasuke promises to make him and the rest of the village pay for that, just as Danzō has. His hatred causes Susanoo to progress to a new level. It dissipates immediately afterwards, Sasuke's eyes finally succumbing to blindness. Sensing this, Sakura sneaks up on Sasuke and tries to kill him. She cannot bring herself to strike him, but Sasuke does not have the same reluctance. Because he used Kamui, Kakashi cannot reach her in time. She is instead saved by Naruto.

Naruto asks how Sasuke could bring himself to try to kill a fellow member of Team 7. Sasuke reminds him that he has broken those ties. Naruto tells Sasuke that he is aware of what Itachi went through at that he understands why Sasuke has done what he has, but Sasuke insists that Naruto cannot, having never had a family. Kakashi instructs Naruto and Sakura to go back to Konoha while he deals with Sasuke, but Naruto restrains him instead. Sasuke takes this opportunity to try and kill Kakashi. His Chidori is blocked by Naruto's Rasengan. Naruto states that he is glad he met Sasuke, as he could easily have turned out just like Sasuke. Sasuke points out that Naruto has only two options: kill him or die. Naruto rejects both.

Naruto and Sasuke are flung apart. Kakashi catches Naruto and Zetsu cushions Sasuke. Zetsu recalls Tobi, who advises Sasuke to retreat. Sasuke refuses until he can hear Naruto's answer about their fates. Naruto claims that they have reached a point where they are the only ones capable of fighting the other. If and when that happens, they will both die. Since they are friends, Naruto will bear Sasuke's hatred until then and eventually die for it. Sasuke accepts his conclusion, but promises that Naruto will be the only one to die when that day comes.

Sakura and Kakashi accept Naruto's request to be responsible for Sasuke. Kakashi tries to use Kamui on Tobi to remove at least one threat, but Tobi tells him it would be useless. After he leaves with Tobi, Sasuke requests Itachi's eyes, needing them if he is to regain his sight and inevitably defeat Naruto, the only way to prove him wrong. The other members of Team 7 collect Karin and head back to Konoha. Meanwhile, Killer B returns to Kumogakure with the Fourth Raikage and Samehada, a souvenir from his battle with Kisame. Nobody realises that Kisame is hiding within Samehada, having faked his death with the help of Zetsu. Kabuto, having got used to Orochimaru's powers, kills three Taki shinobi and decides to make his move.

"Each to Their Respective Villages" (それぞれの里へ, Sorezore no Sato e)

The daimyō of the Five Great Shinobi Countries agree to the formation of the Shinobi Alliance, something the Kage learn of upon their return to their respective villages. Team 7 resuscitates Sakura's escorts and heads back to Konoha. Naruto assures the members of Team 8, Team 10, and Team Guy that he can handle Sasuke before going to Ramen Ichiraku. Kakashi also informs the Konoha Council of Danzō's death and consents to being selected as Hokage. He meets with the Fire Daimyō to make the appointment official, but they are interrupted by news that Tsunade has woken up from her coma. The proceedings end.

As Tsunade eats to regain her energy after coming out of a coma, Kakashi thanked her for waking up in time to stop him from becoming Hokage; a position he claimed he wasn't cut out for. He briefed her on the outbreak of war and everything else that happened while she was in her coma. After lamenting that the Uchiha's Curse of Hatred still plagued them even now. She later convenes a war council to discuss how the village will proceed. After being informed by Sakura that Tsunade had woken up, Naruto celebrates Tsunade's recovery at Ramen Ichiraku when he is summoned to Mount Myōboku. Per Jiraiya's instructions, Gerotora stores himself in Naruto effectively giving him the key to the Nine-Tails' seal. Elsewhere, Kabuto, having finally formed a symbiosis with Orochimaru's remains, confronts Tobi. He reincarnates all the members of Akatsuki as incentive for Tobi to accept an alliance.

In exchange for joining forces, Kabuto requests that Tobi give him Sasuke. He reincarnates someone to force Tobi to agree. Tobi tells Kabuto that he can have Sasuke once the war is over. They make plans for the battles ahead. Anko, having been led there by a trail of bodies left by Kabuto, relays Tobi's location to Konoha. At Mount Myōboku, Naruto considers what to do with the key to the Nine-Tails' seal. Although Jiraiya wanted him to use it to gain control of the fox's power, it is easier said than done. Knowing he will need its power if he is to defeat Sasuke, Naruto accepts that he cannot put it off any longer.

Naruto returns to the Ramen Ichiraku. Two Konoha ninja ask for his autograph, but he doesn't know how to respond. Three days later the Kage meet again to discuss how they should start pooling their resources. As the first matter of business, Naruto and Killer B are to be given constant protection. Tsunade objects since they would both be invaluable in the war with Akatsuki, but is forced to agree. Naruto and B are sent to a secret island in the Land of Lightning, the only country that has yet to have any connections to Akatsuki. Naruto witnesses B's control over the Eight-Tails firsthand soon after arriving, and decides to seek his help in taming the Nine-Tails.

Naruto and his Konoha bodyguards disembark on the Land of Lightning Island. Naruto approaches Killer B and asks for his help in learning to control a tailed beast. B initially appears uninterested, so Naruto tries to sell him on the idea by acting like him. In doing so he accidentally insults B, so B refuses. Naruto asks Motoi, the island's caretaker, how he can convince B, claiming that B is too conceited. Motoi grows angry by Naruto's accusations, but lets it go. He tells Naruto that B probably had his reasons and directs him to the Falls of Truth. He tells Naruto to enter the falls to face his inner self. A "dark Naruto" confronts him, asking why he didn't humour the earlier, "shallow" Konoha villagers with autographs.

Naruto tries to defeat his "inner darkness", the product of his lonely childhood and the lone obstacle in his efforts to tame the Nine-Tails. They are equally matched, so the fight does not go anywhere. Since this is an internal struggle, Naruto returns his attention to the real world and asks Motoi how Killer B overcame the evil in his heart but Motoi couldn't. Naruto then requests that Motoi ask B, however, Motoi weighed down by the guilt of having once tried to kill B stated once again that he could not. He then offers to tell Naruto about B's background so that maybe Naruto could find the answer himself.

The Eight-Tails had long been a problem for Kumogakure; the village constantly tried to gain control of its power, but when its previous jinchūriki would fail to contain it the village would suffer heavy casualties. Loved ones of those who died would come to hate the Eight-Tails and its jinchūriki, just as Motoi came to hate Killer B. Although they were friends, Motoi once tried to kill B, but ultimately could not. He nevertheless felt ashamed, something that became more pronounced as the years went by and B became a village hero. Motoi has long feared that B knew of his attempts on his life and hates him for it. Soon after telling this story to Naruto, Motoi's life is saved by B, who in fact did not know and doesn't actually care. Naruto is happy to see them reform their friendship. 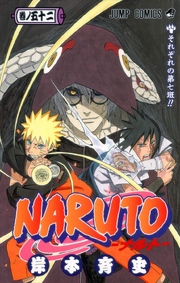